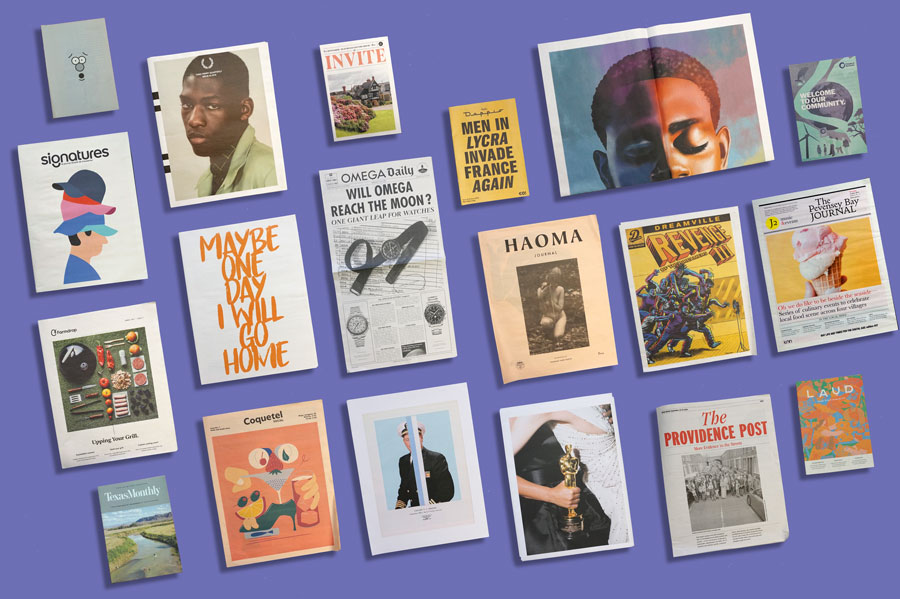 As we head into the new year, we're looking back at some of our favourite newspapers from over 2 million we printed in 2019. It was a busy year here at Newspaper Club, and as ever we were excited to see the many different ways our customers explored what a newspaper can be.

Below are 19 newspapers that stood out in 2019, from a poster series making art more accessible to a retro-inspired comic for rap label Dreamville to a broadsheet commemorating the first watch worn on the moon.

Scroll on to see them all—and start thinking about what you could make in 2020! Here’s to a new year (and decade!) of creativity in print. 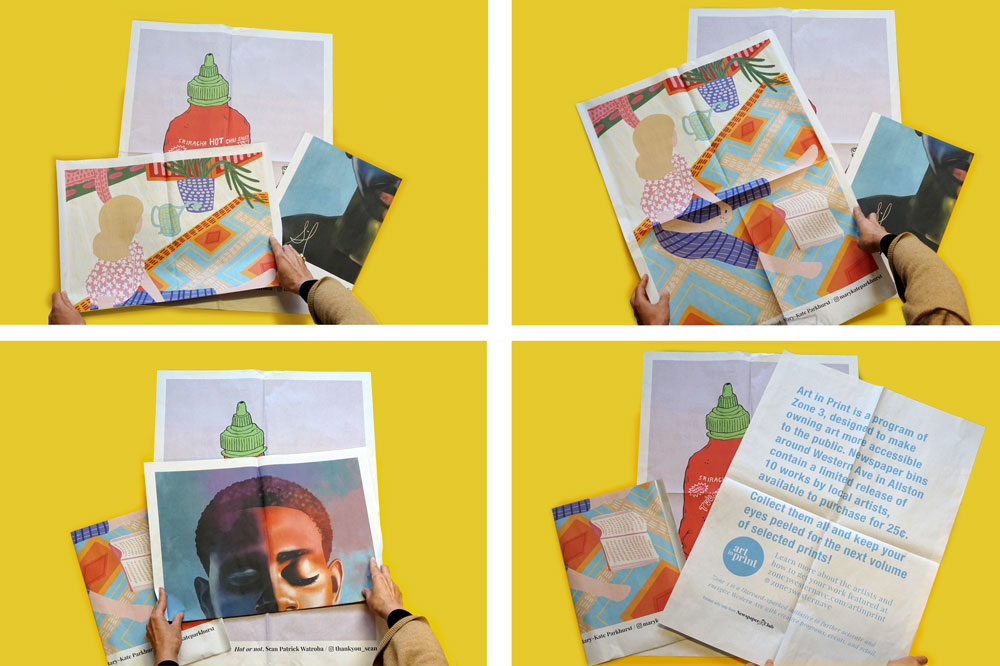 Art in Print is a project to make buying art more accessible. Launched in 2018, it's a collaboration between Harvard-sparked initiative Zone 3 and creative studio Isenberg Projects. Each edition—there have been 4 so far—invites 10 local artists to create newsprint posters which are distributed in repurposed newspaper dispensers along Western Ave in Allston, Massachusetts for 25 cents each.

“We’ve been obsessed with newsprint posters for some time but wanted to take the concept one step further,” says designer Madeline Jacobsen. “Typically someone would have to go to a museum or event to get their hands on one of these posters – we thought, why not make newspaper dispensers mini art galleries?”

Each dispenser contains different artwork, encouraging people to walk around their neighbourhood to discover new prints. 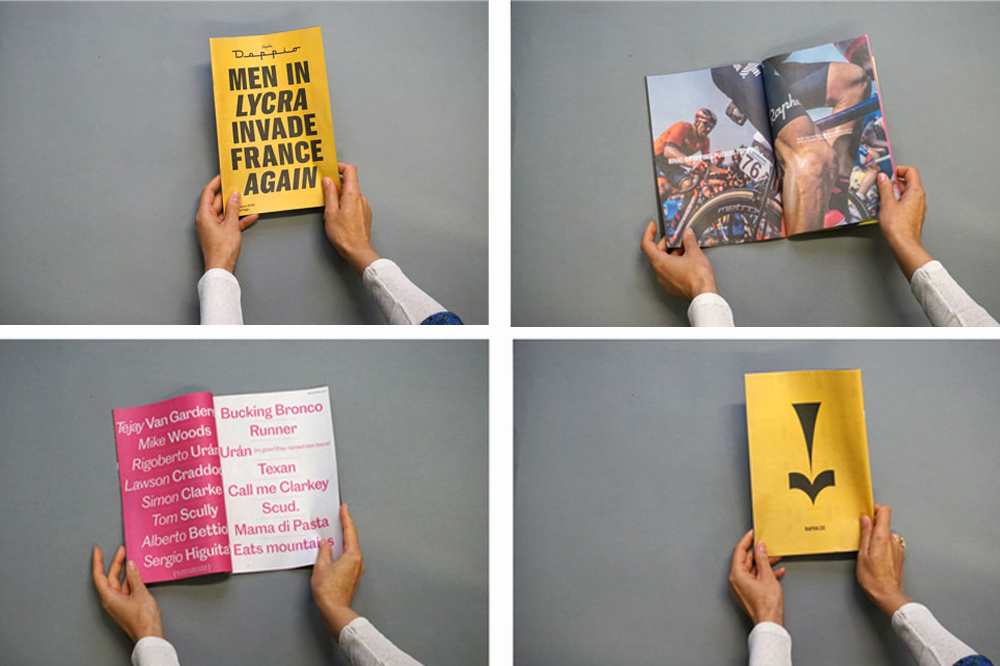 Published by cycling brand Rapha, the Rapha Doppio is an ode to race reportage of yesteryear but with a modern outlook on today's pro-peloton. "We believe cycling is the most beautiful sport in the world," says Rapha art director Patrick Wylde-Mafham. "In an ever digital culture, venerating the physical feats these athletes endure via the permanence of print seems more refreshing than ever." 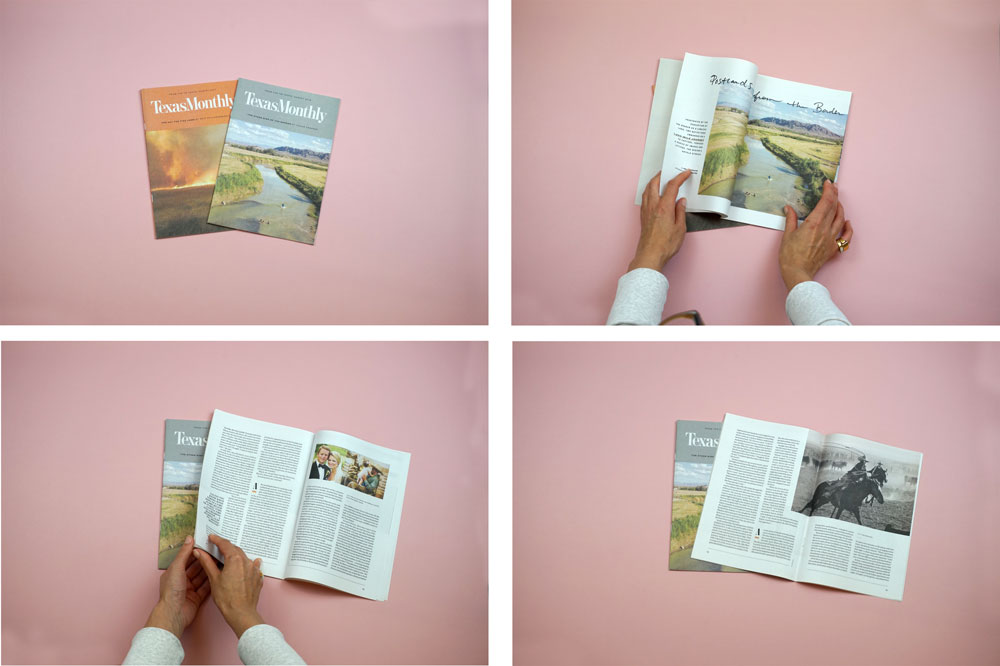 For nearly half a century, Texas Monthly—which calls itself "the national magazine of Texas"—has delivered some of the best long-form storytelling in the US (and earned 14 National Magazine Awards along the way). Three of these stories are showcased in a series of mini newspapers: "The Day The Fire Came" by Skip Hollandsworth, "The Other Side of the Border" by Oscar Casares and "The Greatest" by Christian Wallace.

The newspapers are part of the Texas Monthly Trove project, which revisits articles in the magazine's archive to help "inform our current thoughts [and] give us the much-needed context and perspective to flesh out the news of the day." 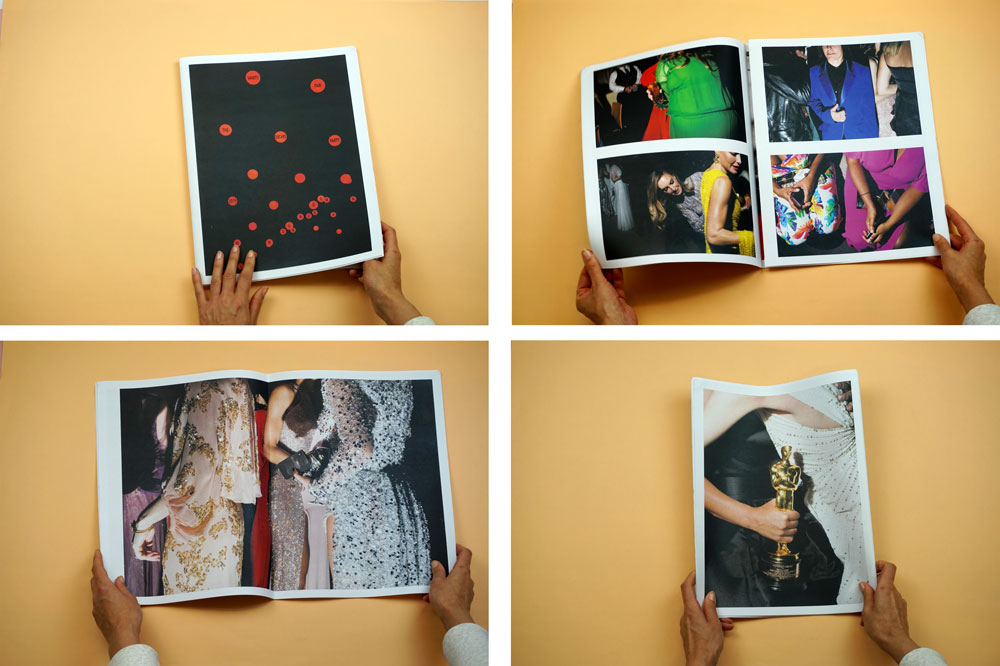 Photographer Landon Nordeman got to go behind the scenes at some of the year's most glamorous events — from the Met Gala to the Oscar De La Renta runway to the CFDA Awards. This portfolio of images he shot at the Vanity Fair Oscars Party give those of us not invited at a glimpse inside the star-studded soiree. Fittingly printed on 90gsm, our heaviest and most luxurious paper. 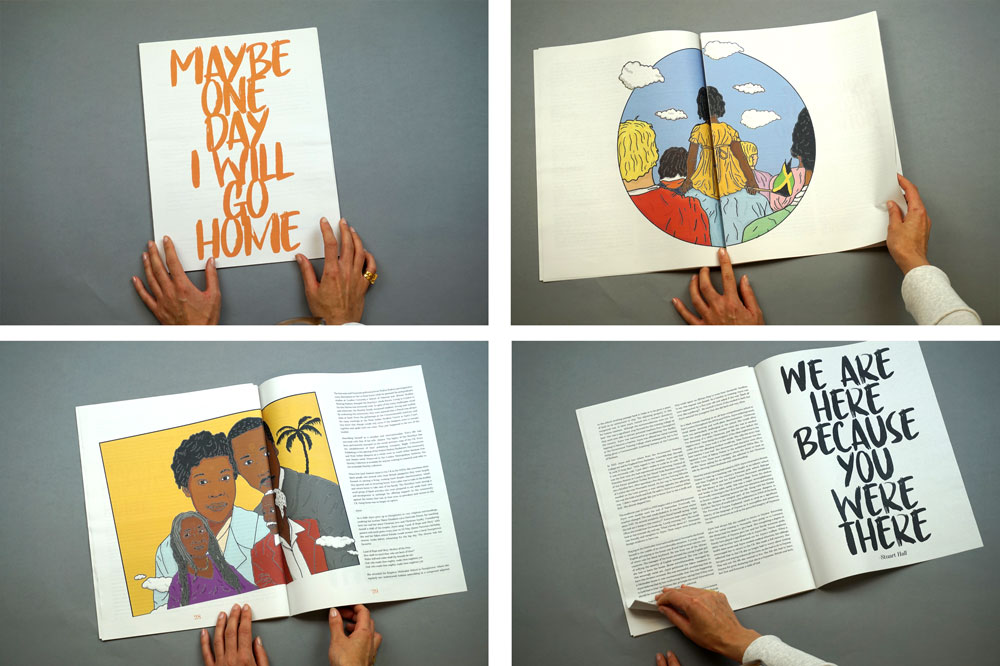 Maybe One Day I Will Go Home

Maybe One Day I Will Go Home is a limited-edition zine created by the University of London Press to celebrate the release of the book Memory, Migration and (De)colonisation in the Caribbean and Beyond.

The zine features powerful stories written by people from the Caribbean who migrated to Britain over seventy years ago, today known as the ‘Windrush generation’. The project is part of a critical national movement to document the cultural, social and political contributions of Caribbean migrants in a time of growing political turmoil.

Topeka documents collage work made by designer and artist John Gall while he traveled through the Midwest. All the collages were made with materials gathered in the area and created on location. Gall, whose collages appear every Sunday in the New York Times Book Review, plans for these site-specific newspapers to be an ongoing project—keep an eye on his Instagram for news.

Revenge of the Dreamers III (from Dreamville)

Working with Dreamville, the massively popular record label co-founded by rapper J. Cole, was “one from the bucket list” for NYC-based creative studio Burn & Broad.  Tasked with creating a visual narrative to promote the release of Dreamville’s new compilation album, Revenge of the Dreamers 3, Burn & Broad used our tabloids to print an action-packed, retro-inspired comic illustrated by artist Benjamin Marra. (Read our interview with designers Burn & Broad about the project)

Laud from Plymouth College of Art

Laud is a look inside the BA Illustration course at Plymouth College of Art. The mini newspaper features events, research, student features, alumni, client work, and more. It was put together by students Sean Morgan, Caitlin Angell, Keri Lock, and Jess Holloway with assistance from lecturers. Cover illustration by Charlotte Leadley.

Farm-to-table delivery service Farmdrop uses a newspaper to share recipes and educate their customers about where their seasonal produce comes from. "Having something physical is a nice expression of our brand," says designer Georgie Nash. "Because we're a small and personal business, it's also an opportunity to show staff faces and their picks on everything from food to podcasts." 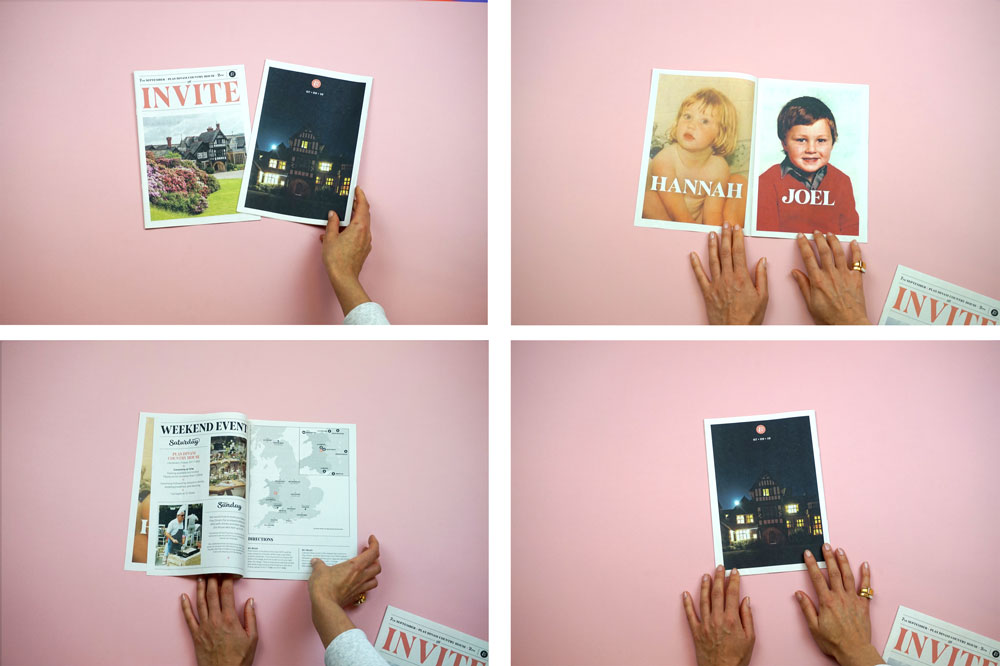 Hannah and Joel got married in Wales in September. Alongside practical information for the ceremony, their wedding invite newspaper included old family photos, a crossword puzzle with clues about the couple and a handy English to Welsh translation guide.

"We've received countless wedding invites that never really convey what you love most about your friends who are getting married," says groom and designer Joel Avery. "We wanted to put together something that was fun to flick through and gave everyone a feel for the wedding, but also took the guest on a journey from the moment they received it in the post right up to the day of the wedding." 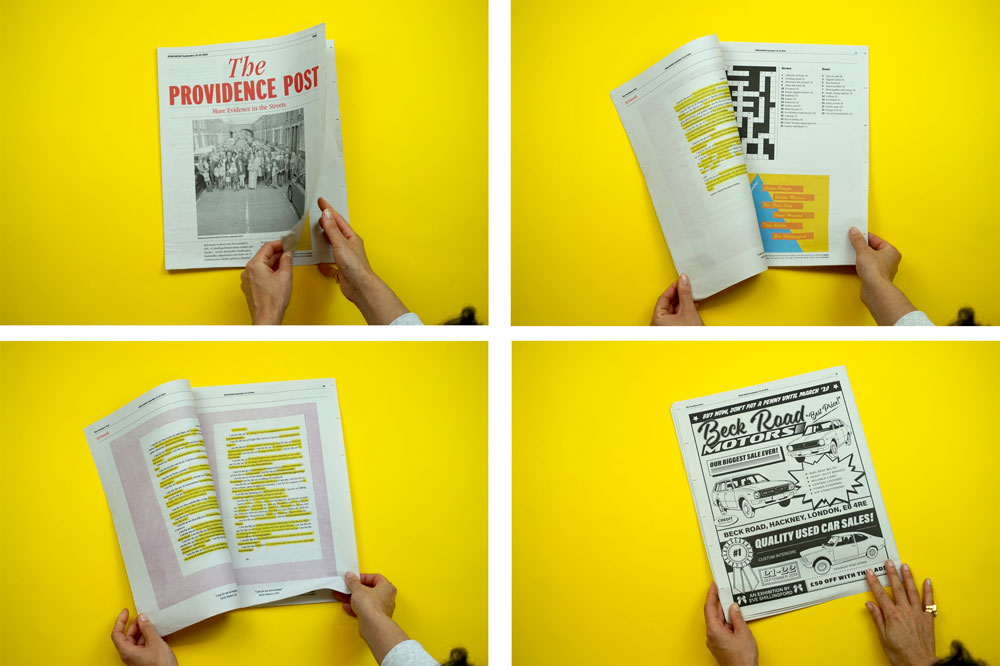 By Beck Road was a 19-hour exhibition held across homes, studios and the street itself of Beck Road in Hackney, part of Open House London which took place in September. Here Design, in collaboration with the artists and creators of Beck Road, designed The Providence Post – a tabloid newspaper exhibition guide showcasing prints, painting, sculptures, ceramics and film from the 42  artists involved.

Founded in 2003, French talent agency Creasenso represents a roster of creatives from over 30 communication-related fields — from photography to animation to sound design. Their quarterly newspaper Signatures is dedicated to their illustrators, and features work from 15 artists including Jérôme Masi, Mathieu Clauss, Joni Majer, Victoria Roussel and more. The tabloid is sent to art buyers and creative directors as a tool to "rediscover the pleasure of holding a unique and reassuring object in hand." 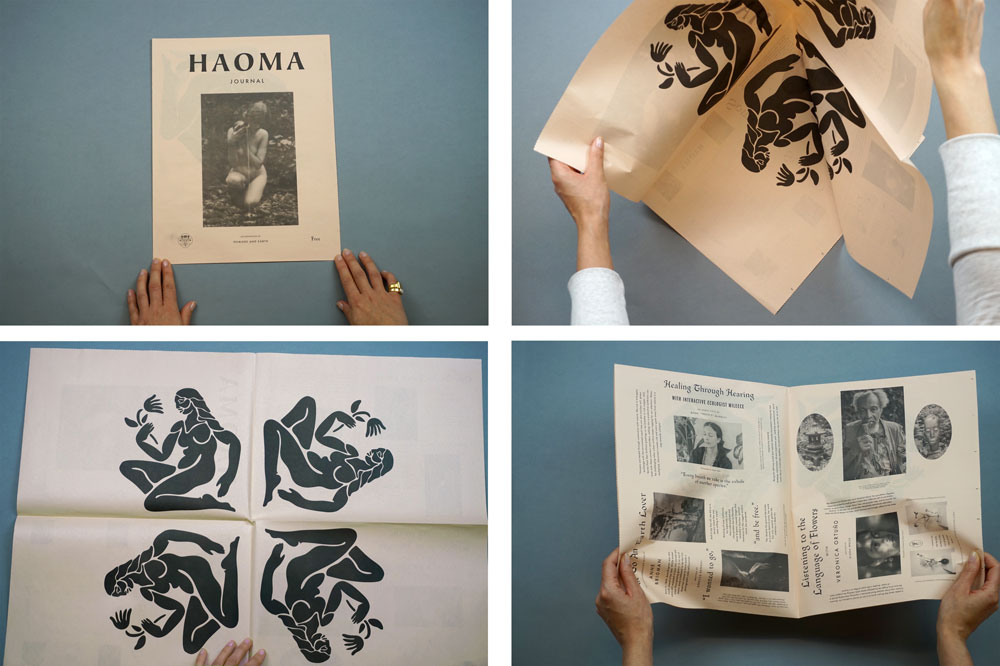 Skincare brand HAOMA launched their line of plant-based products earlier this year. Every online purchase came with a newspaper featuring interviews with inspiring people "who take the human and nature relationship to unexpected places in art and life"—like jazz musician Milford Graves and interactive ecologist Mileece. It's printed on our warm, salmon-coloured newsprint and folds out into a beautiful illustrated poster. Design by LAND. 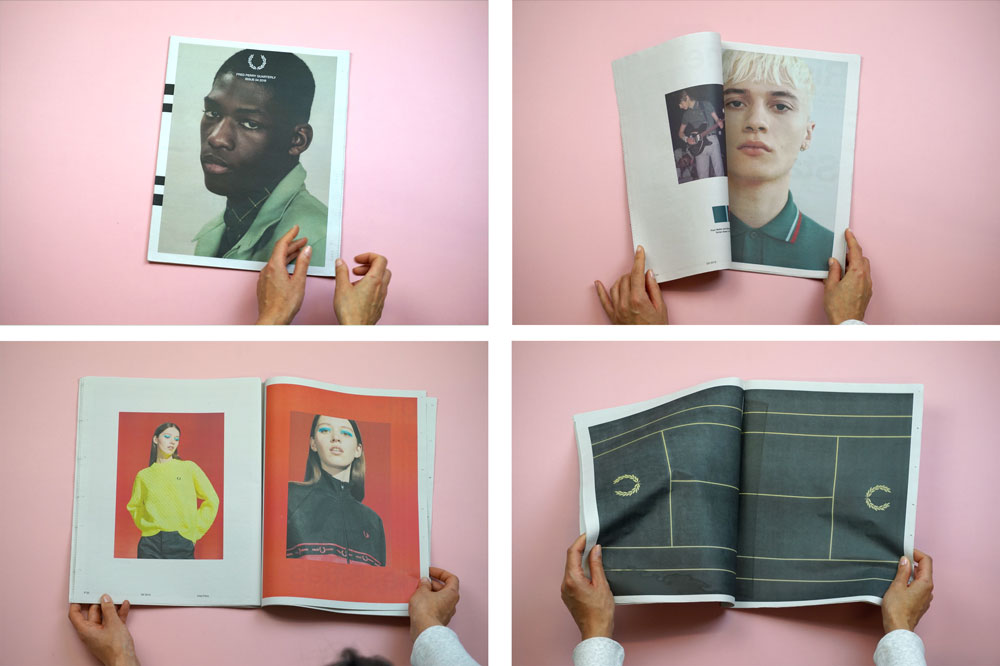 Four times a year British clothing brand Fred Perry publishes a tabloid newspaper showcasing recent collections and collaborations. This latest edition explores the rebel legacy of the bomber jacket and visits Price of Bath, the only tennis ball manufacturer in the UK. Design by StudioSmall. 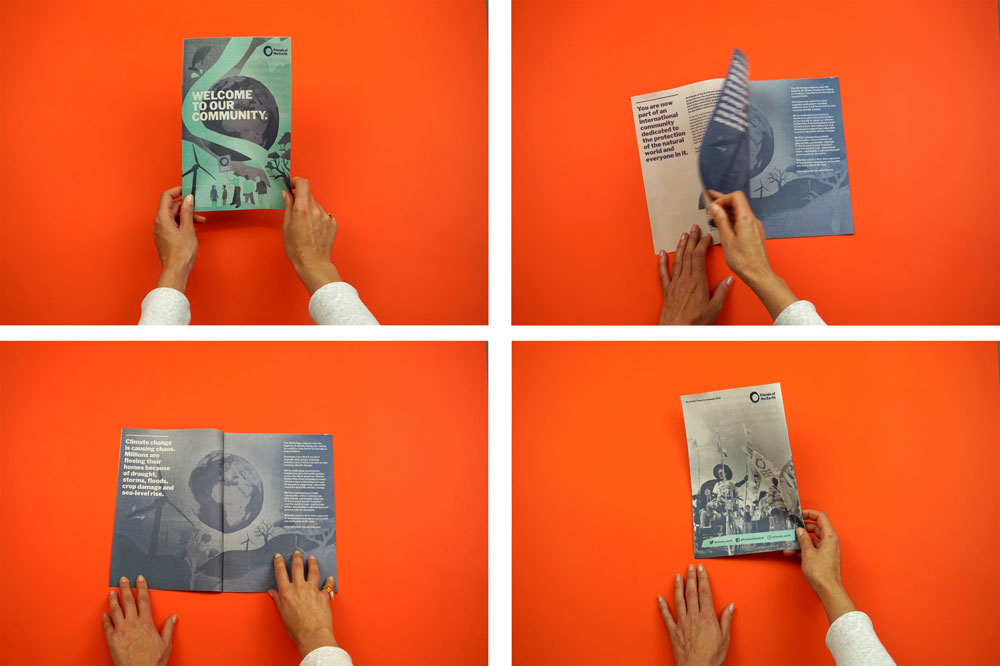 Friends of the Earth

When supporters join environmental organisation Friends of the Earth, they receive a welcome pack that includes this mini newspaper. The magazine features information about current campaigns and successes and helps new members feel welcomed into "a community to protect people and planet." Design by Ellen Foster Price.

In 1969, the Omega Speedmaster became the first watch to be worn on the lunar surface. To commemorate the 50th anniversary of this event, Omega worked with Fiona Leahy Design to produce an epic, space-themed dinner in London, complete with this special-edition newspaper.  The Omega Daily opens into a big poster of the exclusive gold watch Omega presented to the Apollo 11 astronauts at a gala in Houston after their return. 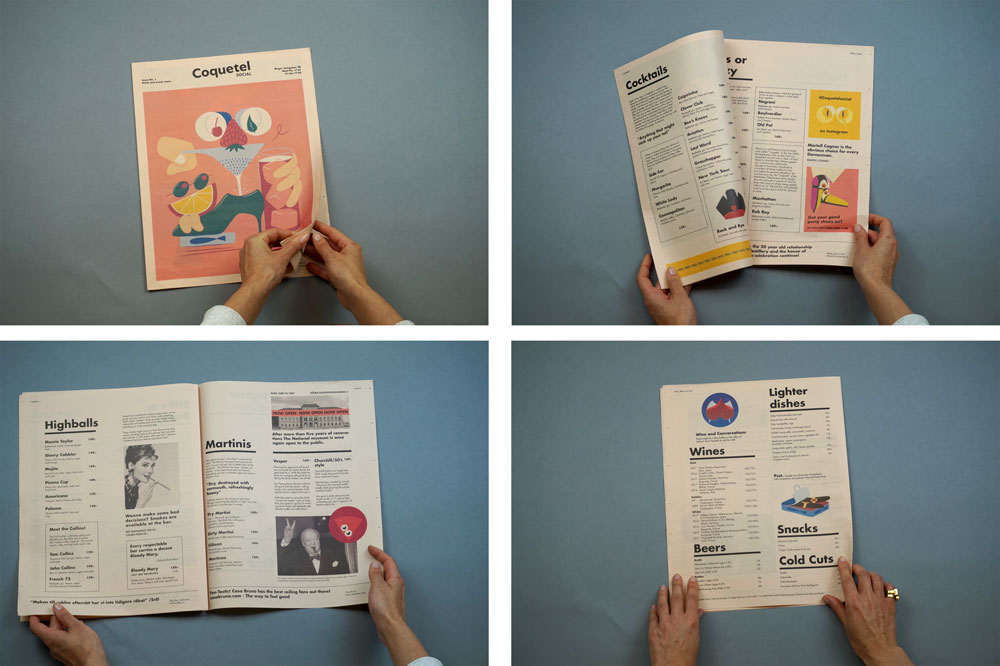 Stockholm cocktail bar Coquetel Social  uses this tabloid, printed on salmon newsprint, as their menu. We love the playful illustration and it doubles as a colorful placemat. Design and illustration by Sebastian Ramn. 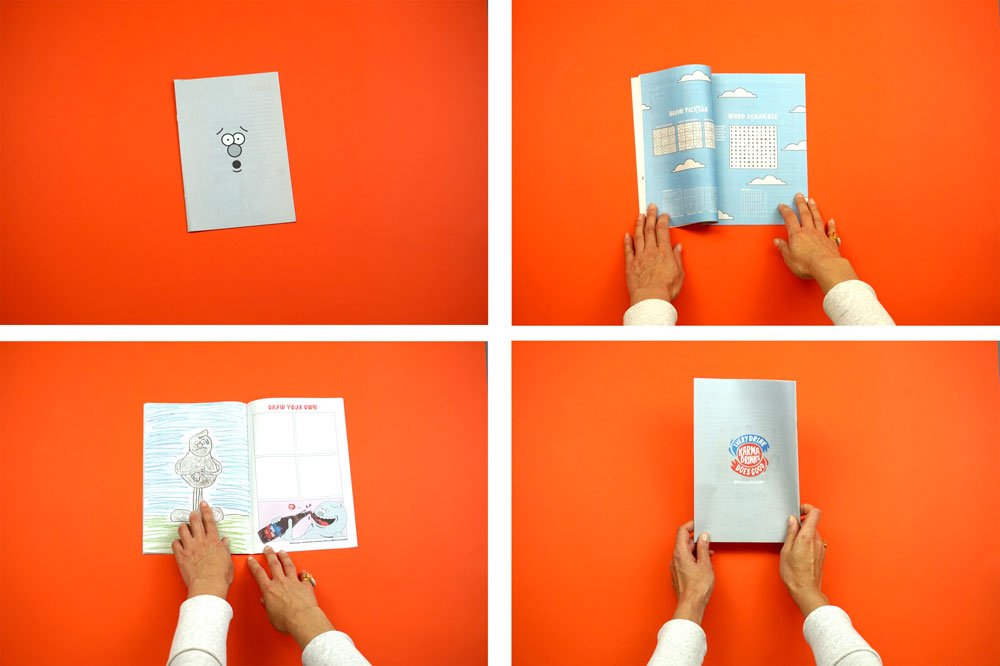 This year Fairtrade drinks company Karma Cola introduced Lesley, a new mascot "who doesn’t always get it right — even though he tries his best." They used our mini newspapers to share Lesley's story with their customers, distributing Karma Comic at cafés and stores where their drinks are sold. Design and illustration by Wonderhood Studios. 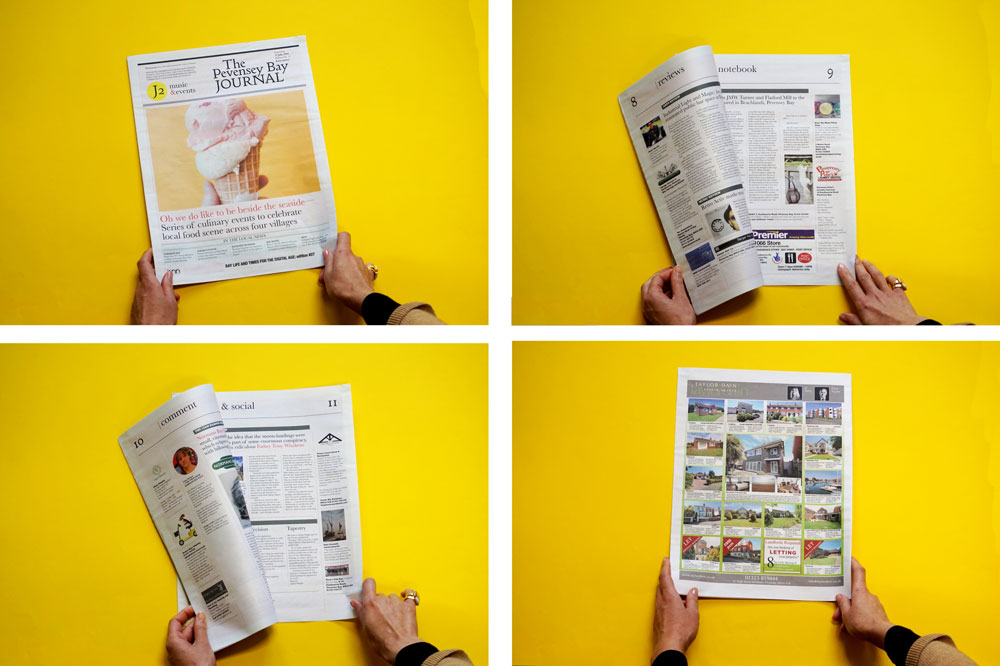 Taking inspiration from early New Yorker designs, hyperlocal newspaper The Pevensey Bay Journal launched in 2016 with a mission to celebrate the people of Pevensey Bay and champion local concerns.

Published 10 times a year, the newspaper is available for 40p at newsagents around town. “We sell out with every issue,” says editor Simon Montgomery. “When the Journal comes out each month, you see people in cafes spreading the broadsheet out on tables and embracing the publication with this sense that it is their own newspaper.”