How Burn & Broad created an action-packed comic for Dreamville 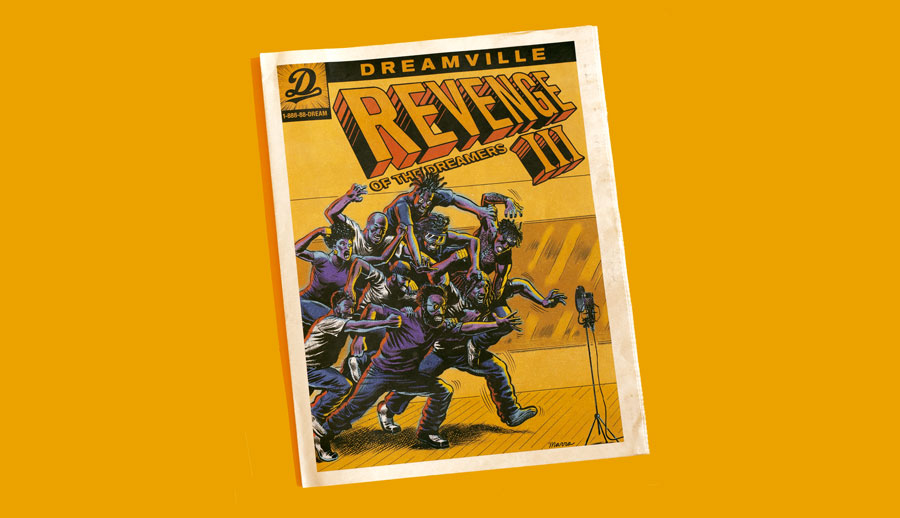 Working with Dreamville, the massively popular record label co-founded by rapper J. Cole, was “one from the bucket list” for NYC-based creative studio Burn & Broad. Founded in 2016, the studio has previously animated athletes who practice yoga for Nike and crafted stage visuals for Cardi B’s performance at Coachella.

Tasked with creating a visual narrative to promote the release of Dreamville’s new compilation album, Revenge of the Dreamers 3, Burn & Broad used our tabloid newspapers to print an action-packed, retro-inspired comic illustrated by artist Benjamin Marra.

Burn & Broad designed custom vending machines to distribute the comic in 5 cities around the country.

Below, Burn & Broad co-founder Eugene Serebrennikov walks us through the process of capturing “the full intensity of the recording process” in print and launching the comic (complete with custom newspaper dispensers) in record stores across the US. 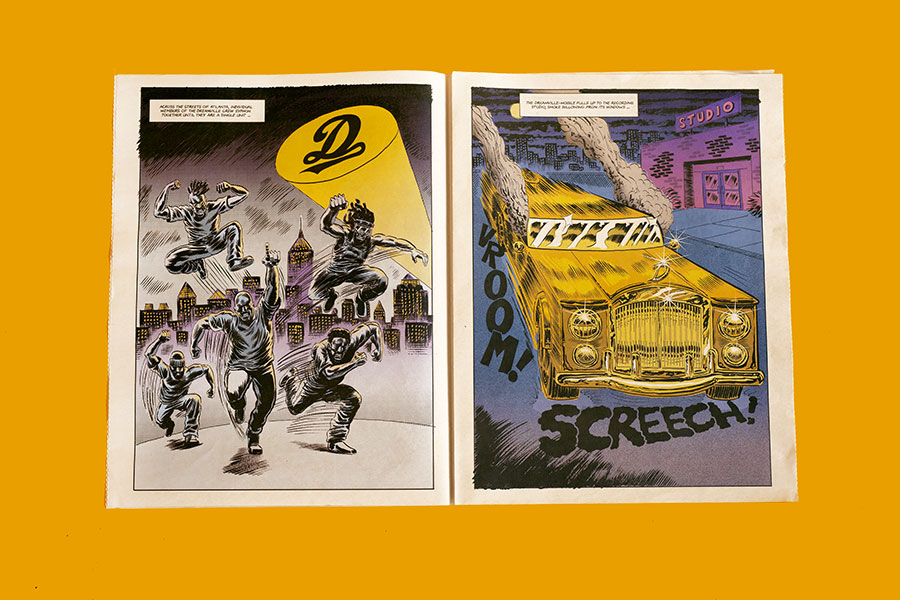 In 2016, Vicente [Garcia Morillo] and I left behind cushy corporate design jobs to start our own creative studio, Burn & Broad. I left a dream job as Art Director for Nike Basketball—a job with perks that included working directly with Lebron James, Kobe Bryant and Kevin Durant. Vicente left a high-profile design job for a prominent European fashion house. Our third partner, Ramon [Broza], joined us last year. We all abandoned the steady income, health benefits and security that come with a corporate job to follow our creative passion and develop our own studio.

"TO CAPTURE THE FULL INTENSITY
OF THE RECORDING PROCESS, IT
FELT LIKE AN OBVIOUS CHOICE TO
TELL THE STORY THROUGH A
COMIC BOOK."

Today we pride ourselves on designing outside-the-box visuals across sport, music and youth culture. Our roster of clients includes Nike, Cardi B, and now Dreamville. Each client, concept and design approach always varies and evolves—there are no repetitive conceptual formulas, no one-trick pony design styles, no templates. Just a constant evolution challenging the conceptual and creative limits of each project. 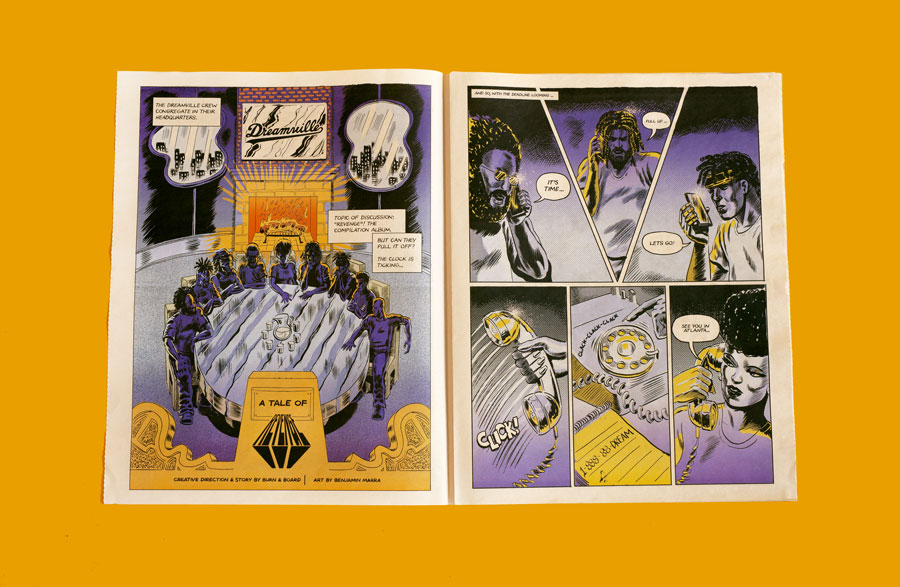 This particular Dreamville project was one from the bucket list and it arrived through a bit of serendipity. I’m always trying to connect with other NYC-based creatives and earlier this year I linked up with the filmmaker Scott Lazer. I’ve been a big fan of his work and design aesthetic and hoped to have the chance to pick his brain.

"THE MOST EXCITING [PROJECTS] FEEL
LIKE PLAYING HOOPS—THE TEAM KEEPS
MOVING THE BALL UP THE COURT AND
BUILDING OFF OF ONE ANOTHER'S
MOMENTUM."

It wasn’t until after we met that I realized he was also Head of Film at Dreamville. We clicked off the bat from a creative standpoint and luckily Burn & Broad had the chance to throw our hat into the ring on this project. It was an unbelievable opportunity to work with the most badass label on the planet that just dropped their game-changing album, Revenge of the Dreamers 3.

"Dreamville Presents: Revenge", a documentary chronicling the Revenge of the Dreamers III sessions at Tree Sound Studios in Atlanta, Georgia.

After our first meeting with the Dreamville team, we started ping-ponging conceptual ideas back and forth. The intention was not to simply promote the release of Revenge of the Dreamers 3, but to create a visual narrative that told the story of how the album came to life: imagine an extremely fast-paced, 10-day recording session with 30 rappers and singers competing for time on the mic! (Watch the documentary above to get a peek behind the scenes.) To capture the full intensity of the recording process, it felt like an obvious choice to tell the story through a comic book. 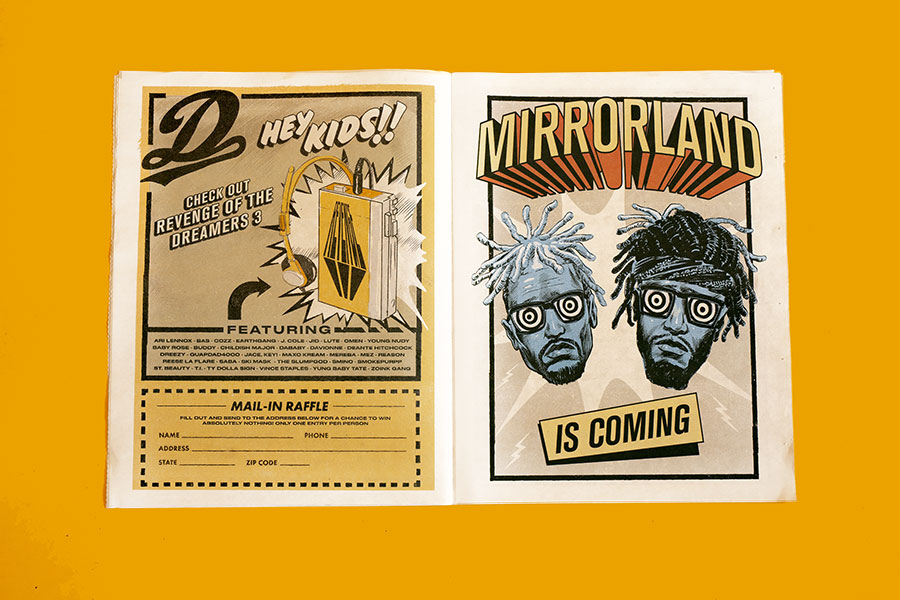 BRINGING THE STORY TO LIFE

Illustrator Benjamin Marra was an obvious choice as a collaborative partner. His perfectly-imperfect illustration style is so unique and raw and blended well with the “get your hands dirty” approach of the recording sessions. The collaboration was nothing but positive from day one. 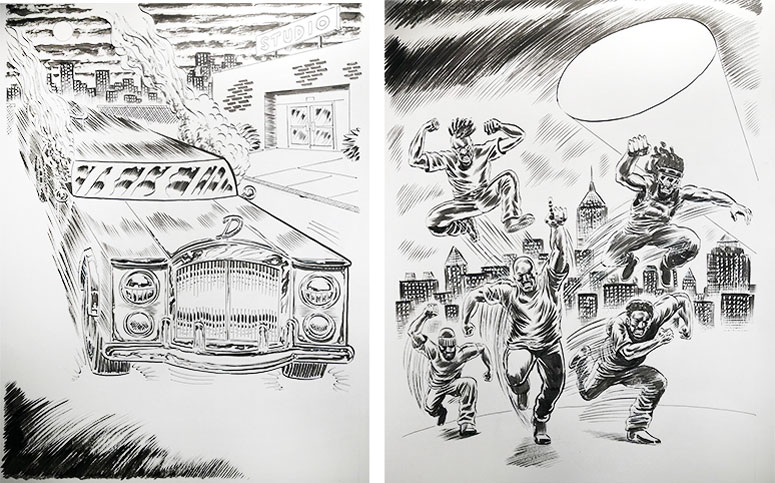 Sketches by Benjamin Marra for Revenge of the Dreamers 3 comic.

The project took roughly 2 months from start to finish. All design projects have multiple iterations but the most exciting ones feel more like playing hoops, where the team keeps moving the ball up the court and building off of one another’s momentum and creative ideas. That’s exactly how this Dreamville project panned out. 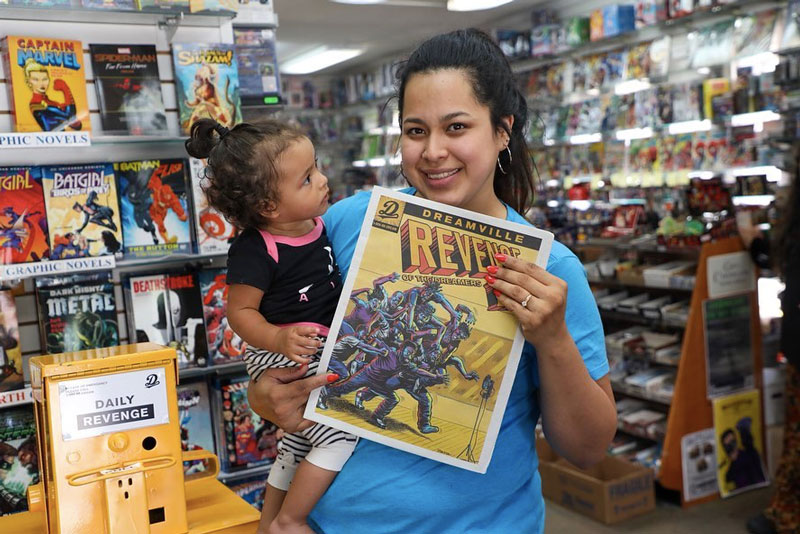 Fans with the comic on launch day. Image via @dreamville.

One thousand copies of the comic were released in 5 cities—Los Angeles, Charlotte, Chicago, Brooklyn and Atlanta—on 27 July 2019. To create a unique experience we recreated iconic NYC newspaper vending machines with graphics inspired by Revenge of the Dreamers 3. We placed them in the 5 comic book stories and stocked them up with (free!) copies of the 12-page newspaper. The vending machine became an art piece that people were able to interact with. 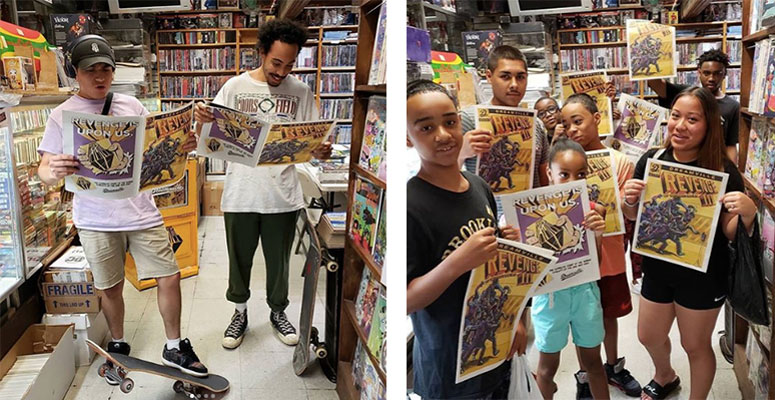 Fans with the comic on launch day. Image via @dreamville.

It really felt like such a positive vibe and experience. Dreamville fans young and old came out and connected over a shared love of music and art—it was a beautiful thing. We feel so lucky to be doing what we love and are looking forward to the next project!