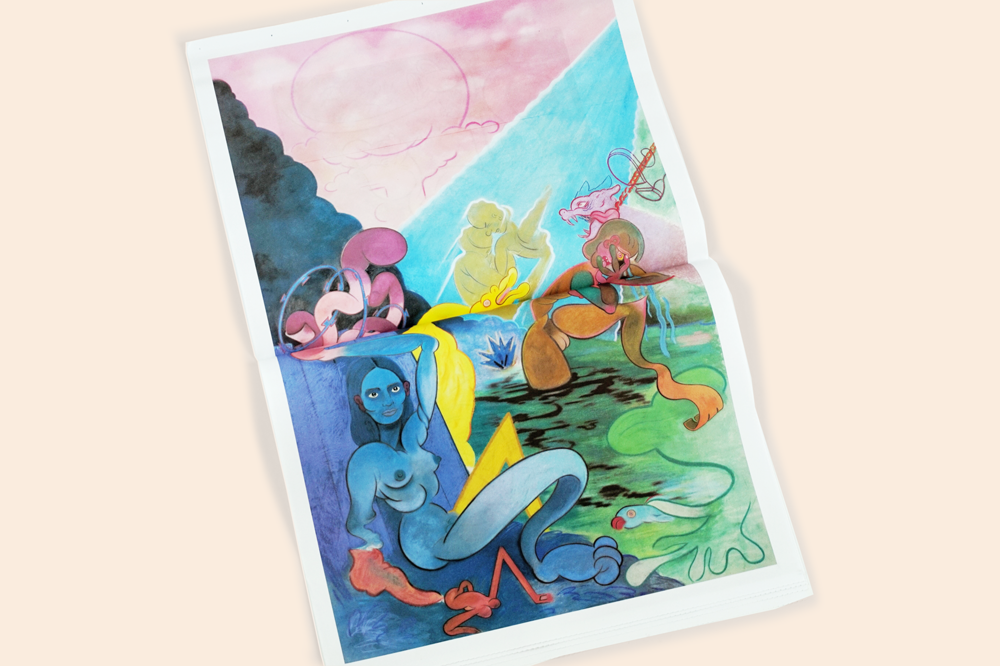 Bodies behave differently in Koak's world. They bend and bulge unnaturally, twist and stretch in surreal movements. Her work has been described as "Disney meets Picasso" but the San Fransisco-based artist says her influences are hard to pinpoint, ranging from punk music to Mary Cassatt. One thing that fascinates her, she tells us, is the depiction of women "wholly within their moment."

Bathers, her first solo exhibition, was shown at Alter Space earlier this summer. The paintings, created with chalk pastels rehydrated with milk casein, explore bathing and the complex female figures revealed in the process. "When I’m drawing these women, one of the most important feelings I’m trying to convey is tension,” she told It's Nice That. “I may draw a figure with confident breasts, but a defeated leg, a crushed hand, or a shy foot. It’s about creating these amalgams of being, which I think is very much about the human condition."

To accompany the show, Koak produced a numbered traditional tabloid catalogue—which visitors told her they've since framed and displayed at home—and we were blown away by the energy and intimacy of her work. For Illustration Week, she tells us about finding inspiration in mythology and history and how making zines as a teenager informed her approach to the catalogue. 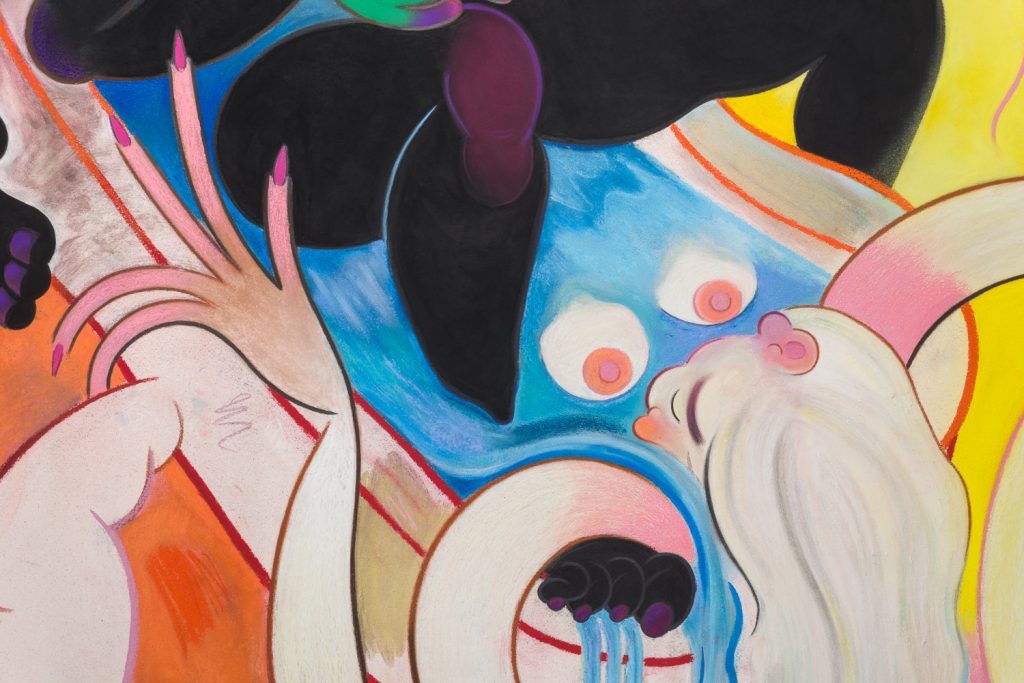 Detail from The Chariot (2017) by Koak, featured in "Bathers" exhibition.

How did you develop your drawing style? How has it changed over the years?

It wasn’t really a decision that I set out to make - to create work that was of a certain style - moreso it developed from spending time sick at home as a kid, occupying myself by drawing versions of my favorite comic book characters, watching cartoons, or visiting museums with my mother and drawing from life.

Those initial experiences have evolved into the work I make today. In some ways it’s changed greatly, in other ways it’s stayed exactly the same. 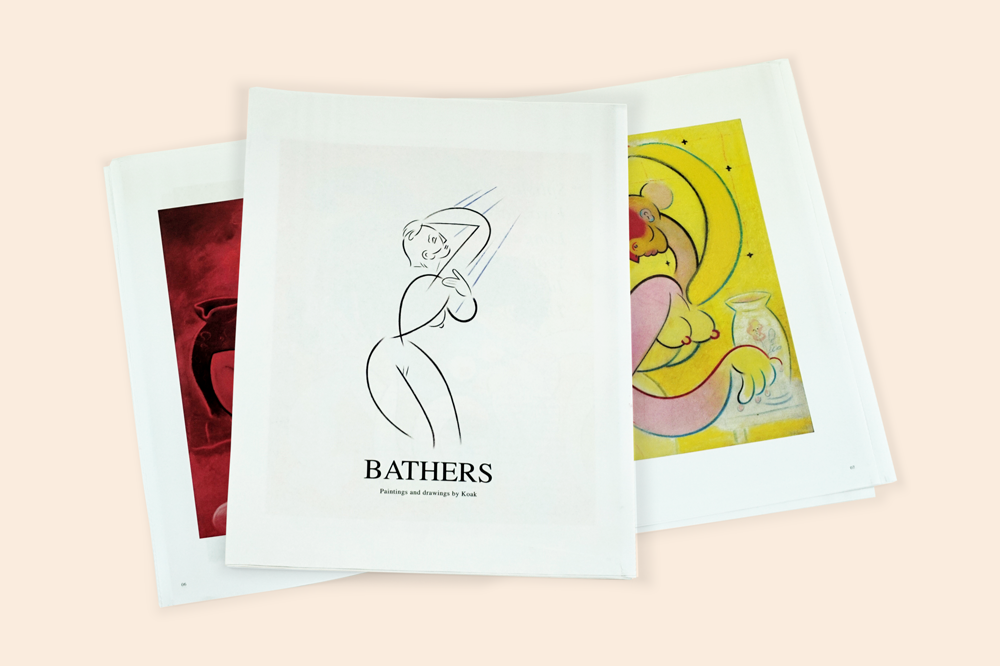 What are your favourite tools to work with?

Anything that makes a good line.

Where do you turn for inspiration?

I’m inspired by something internal that is difficult to specifically pinpoint. At it’s core, it revolves around the concept of archetypal personas, though those personas themselves can be inspired by anything from mythology, life experiences, emotions, or historical narratives. 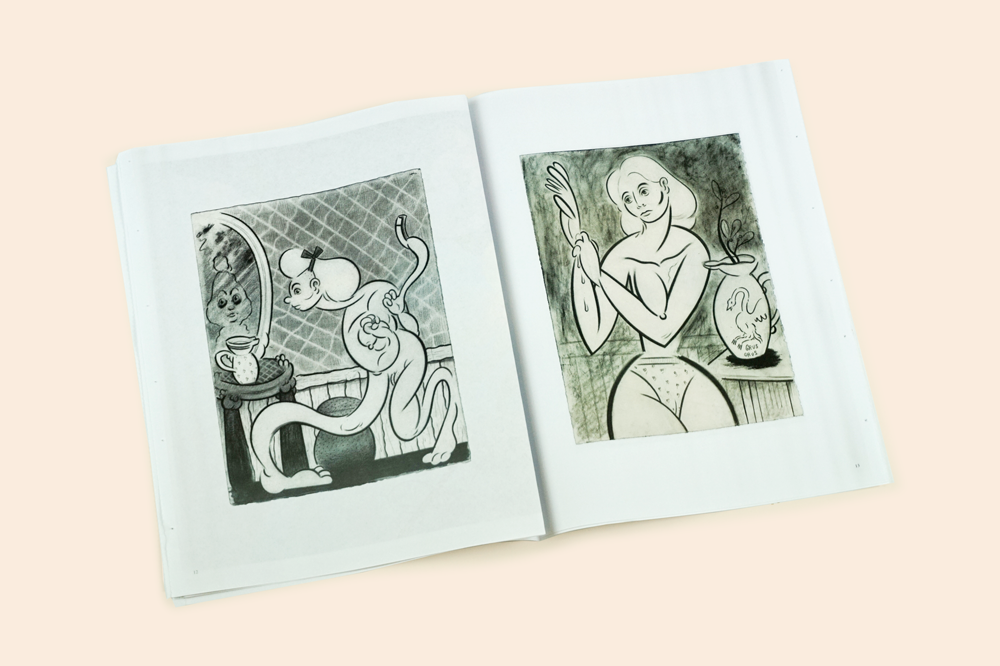 Could you tell us about your recent Bathers exhibition at Alter Space in San Francisco?

"Bathers" was my first solo exhibition. I had the idea for awhile about wanting to create a show that centered loosely around the theme of bathing. Partially because there's such a wealthy history in art that pertains to it, but also because the construct of bathing holds symbolic reference to many of the themes I'm interested in. Bathing can allude to ideas about identity, transformation, and renewal, as well as open a discussion about the tenuous relationship humans currently have with water. 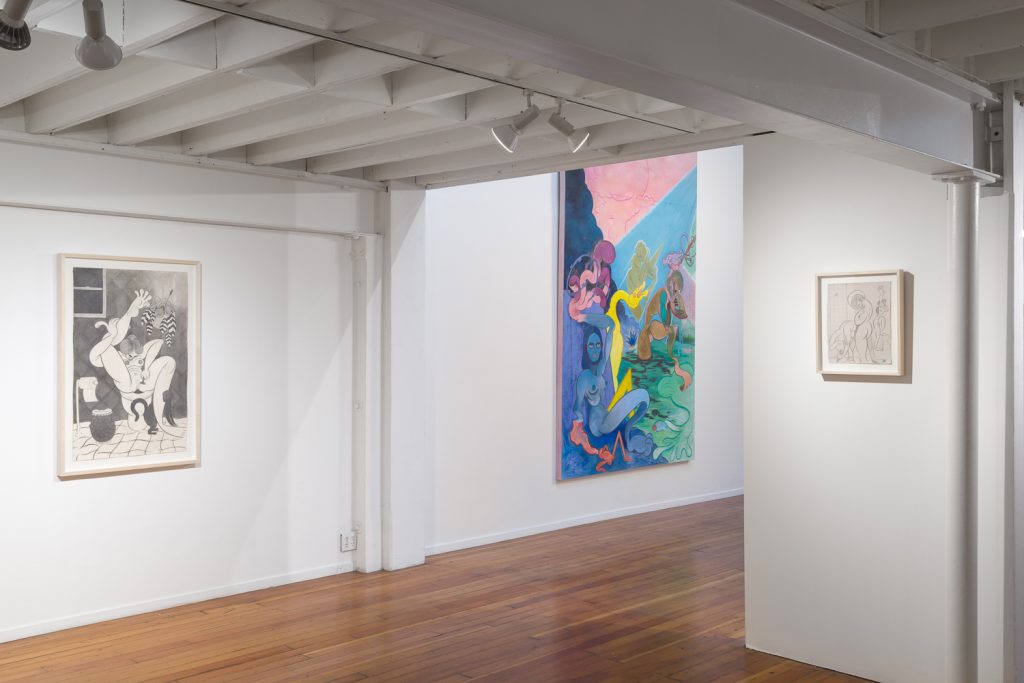 Do you have a favourite bathing illustration from art history?

Mary Cassatt created a series of etchings inspired by an exhibition of Japanese woodblocks she saw at the École des Beaux-Arts in Paris. In particular the work of Kitagawa Utamaro, who himself created many beautiful works that revolved around the theme of bathing. 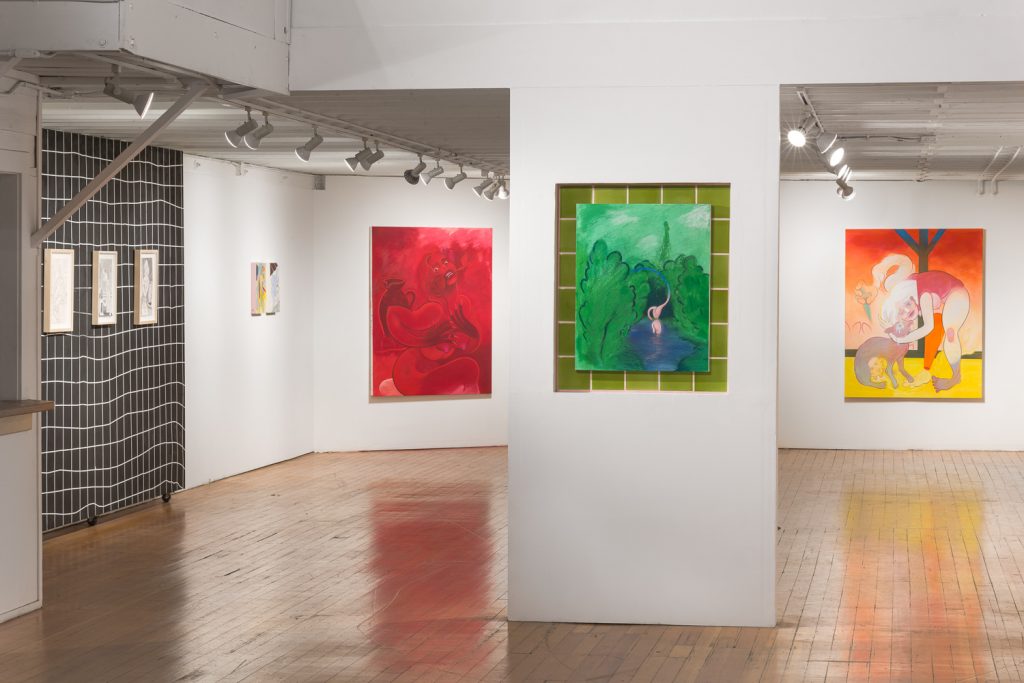 There’s something in Cassatt’s series that has always stuck with me and made them some of my favorites, a kind of privateness that does not feel voyeuristic in the way that the bather paintings of her male peers do. With many of the male painters of that time (Degas, Pissaro, Renoir) it is impossible to remove the act of voyeurism, whereas with Cassatt’s work the women feel wholly within their moment. 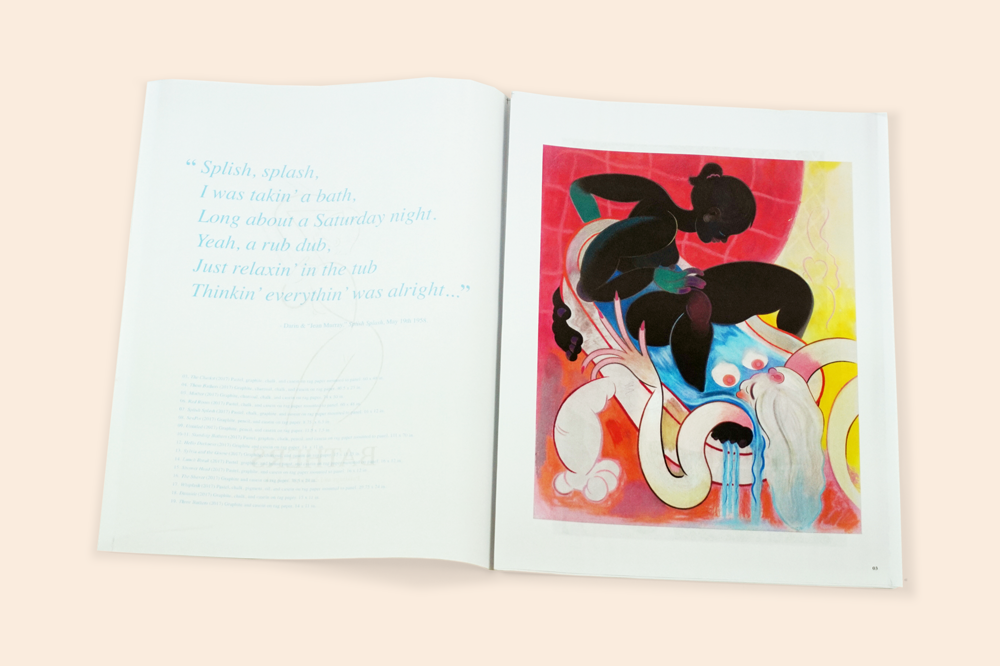 Why did you choose a newspaper to accompany the show? What was the response to it?

Editions, ephemera, and collectibles have always fascinated me, especially since making my first zine as a teenager. Coming from a world of comics and punk, I grew up surrounded by the mentality of disseminating your own information. For me, it’s important to have something that is both affordable and accessible, but to make sure that affordable thing feels special and cared for.

The response has been great. I’ve received a number of photos from people who have either framed the piece or displayed it on their coffee table, which has been lovely to see. 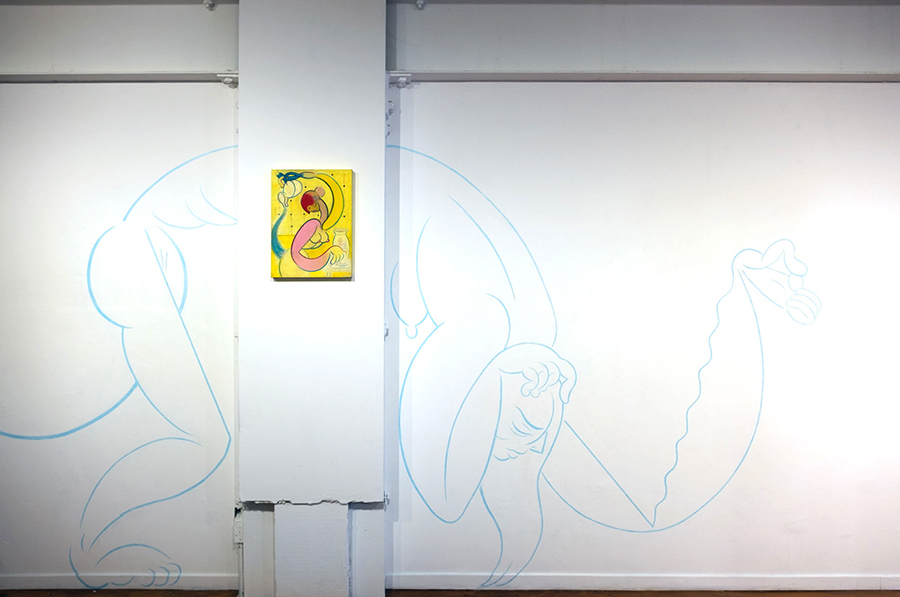 What's next for you this year?

I have work in a few group shows that opened recently: Laura Bartlett in London, the Museum of Sex in NY and MAW Gallery, also in NY, as well as work in a few upcoming art fairs later in the year. Beyond that I plan to start exploring a new body of larger works, and hopefully several more publications. 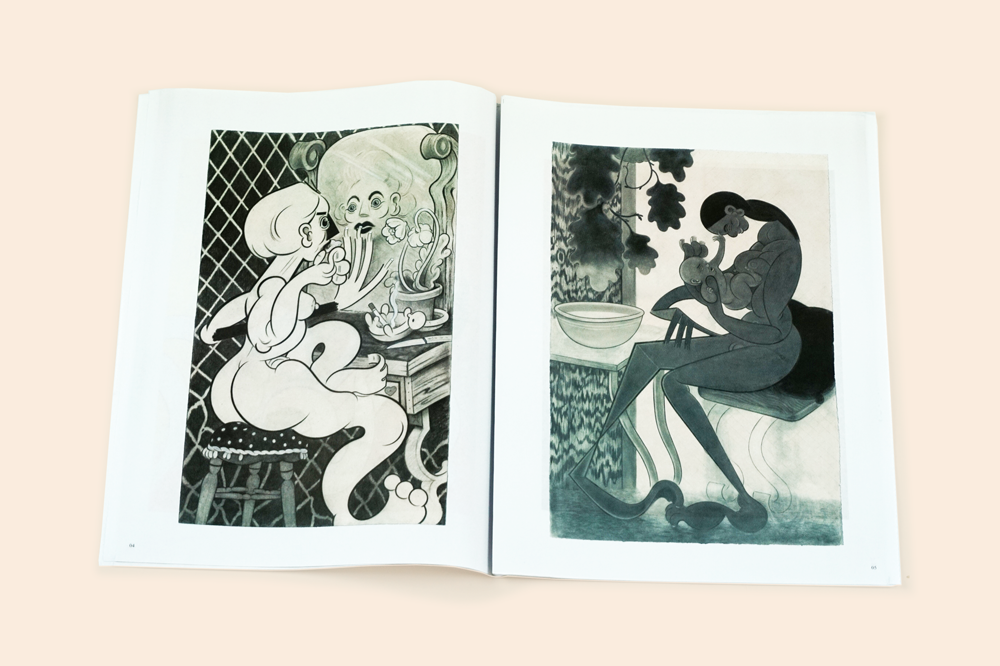 And finally: Where is your favourite place to read a newspaper?

Out of someone’s well-loved and dog-eared collection.