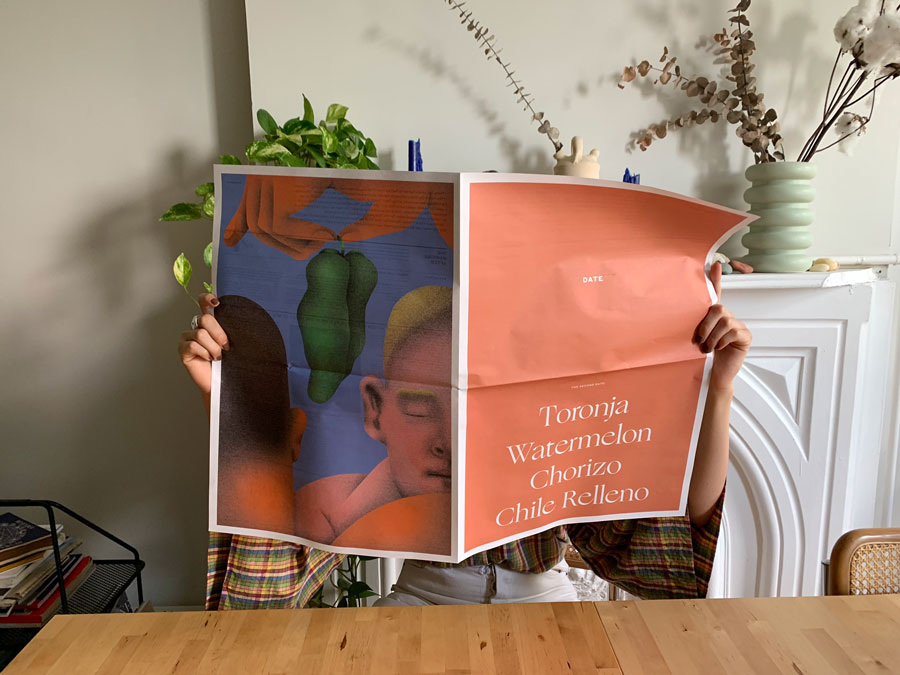 What do you do when you can’t find anywhere to eat in New York City? After toying with the idea of opening their own restaurant, designer Simonetta Nieto and musician Pat McCusker decided instead to publish a newspaper with recipes to cook at home.

Launched on Earth Day this past April, Date Paper is a quarterly publication that aims to make readers “more mindful of the planet and each other through a dinner date focused on primal dishes.” Each issue, printed on our digital broadsheets, features recipes for a three-course meal using ingredients that are in season and available from local suppliers. 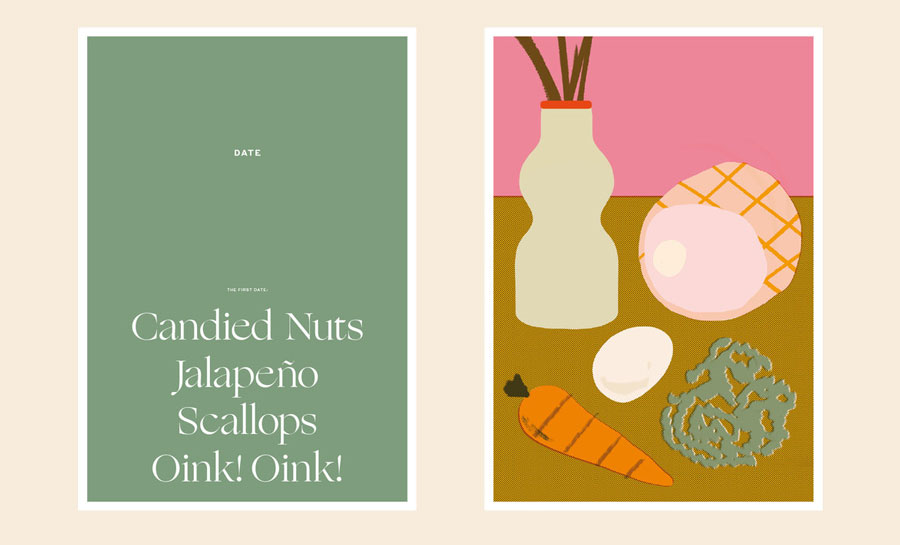 Front and back covers of Issue 1 of Date Paper, released in April 2019.

All proceeds from the newspaper, which costs $6 a copy, are donated to a food-based charity. For the first issue it was Farmworker Justice; for the second issue, which came out in August, it’s the Hattie Carthan Community Garden in Brooklyn. Simonetta, who is originally from Mexico, says the project is also an opportunity to showcase work from Latinx artists including Elena Boils, Eugenia Mello and Derek Abella.

Below, Simonetta tells us about the design of Date Paper (which is in part inspired by Braun manuals) and how they’re using the publication to support local food businesses. Plus she shares their recipe for the spicy and cheesy Mexican dish chile relleno featured in the latest issue. 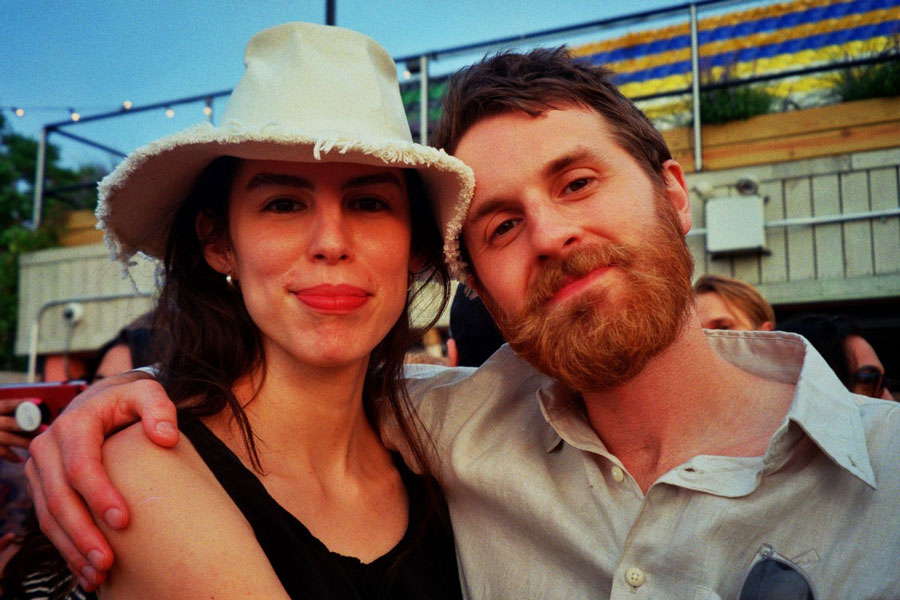 Back in 2015, Pat was experiencing health difficulties and decided to give the Paleo diet a try. To his surprise, he started feeling better. He wanted to keep up with the Paleo lifestyle, but we quickly noticed how difficult it was to eat out in New York. We thought, "How cool would it be to open up a cute Paleo/primal restaurant called Date?" The name Date came from the fruit, but it’s also a fun play on words. 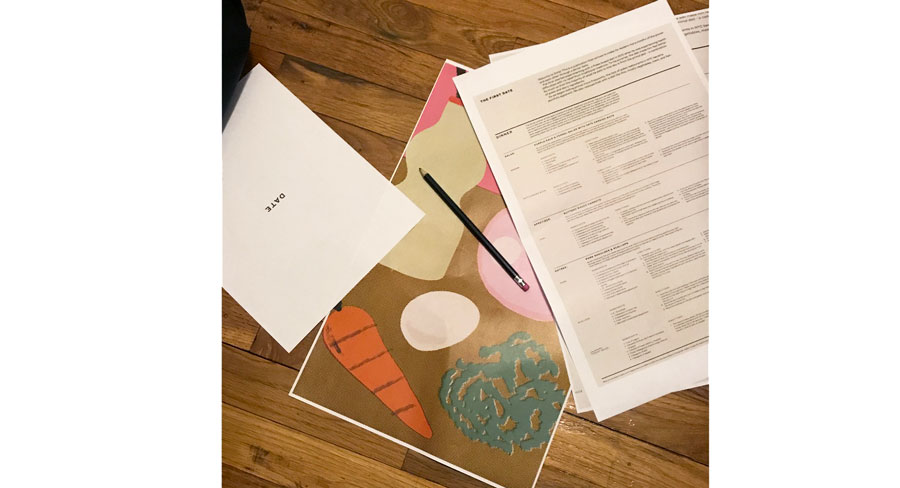 Issue 1 of Date Paper in progress.

Ultimately, we weren't ready to quit our jobs to start a restaurant, so we decided to create some sort of zine instead. This was a perfect way to blend food, community and art.

"PEOPLE DO CARE ABOUT EACH OTHER AND
THE PLANET. YOU JUST HAVE TO CREATE
THE OPPORTUNITY FOR THEM TO
EXERCISE THAT."

We both have creative careers outside of Date – I’m an art director at The New York Times and Pat is a musician, producer and audio engineer. We’ve been dating for years and although we’re both creative people, we’ve never created anything together. This was an opportunity for us to team up on a project for the first time. 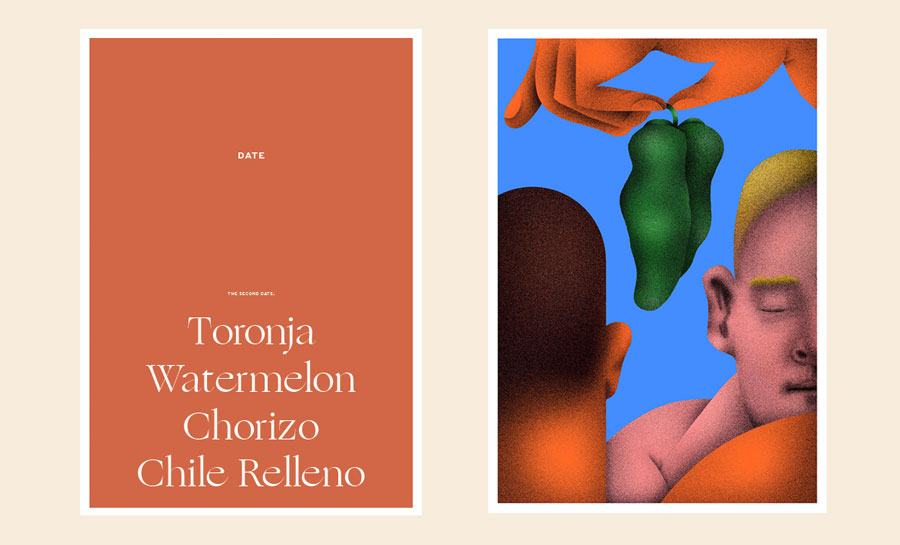 Front and back covers of Issue 2 of Date Paper, released in August 2019.

We’re using the newspaper to promote healthy eating with a loved one while bringing attention to local food businesses and the people that run them.

The inspiration for recipes often comes from a dish that we encounter at a restaurant that isn’t paleo, and we think about how we can adapt it. For example, using mushrooms instead of black beans in our chili relleno recipe, or cauliflower rice instead of traditional brown or white rice for a fried rice recipe we’re working on for an upcoming issue. We try to focus all the recipes around foods that are in season. 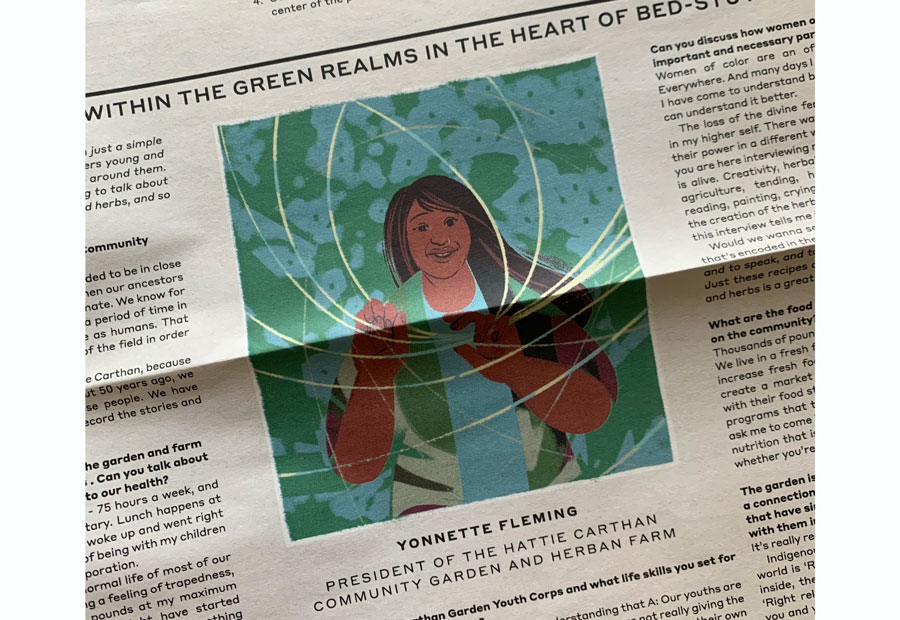 Detail of interview with Yonnette Fleming in Issue 2 of Date Paper. Illustration by Eugenia Mello.

Each issue also includes an interview with a local food pioneer, and we make sure our recipes include foods that can be purchased from whoever we’ve interviewed. In Issue 2 we have an interview with Yonnette Fleming, President of the Hattie Carthan Community Garden in Brooklyn, and feature a recipe for chile relleno (Find the recipe at the end of his blog post!) It calls for poblano peppers, mushrooms, and tomatoes – all of which can be purchased from the Hattie Carthan garden. 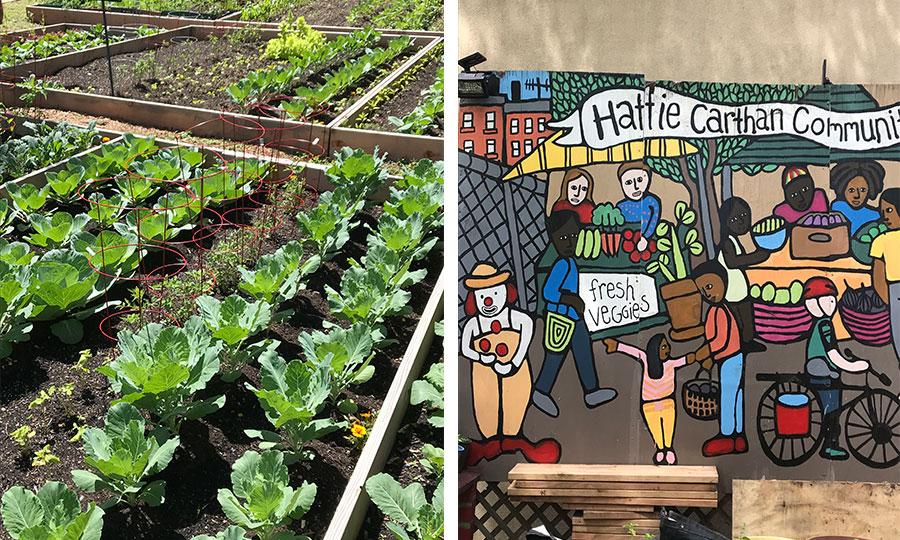 We had heard about the garden but had never been there. When we first visited and met Yonnette, we were immediately transported by the history and beauty within the garden. The fact that a garden of this size exists in the heart of Brooklyn and is producing an incredible amount of healthy, nutrient dense food for the surrounding community is really something special. We are now part of the weekly CSA! 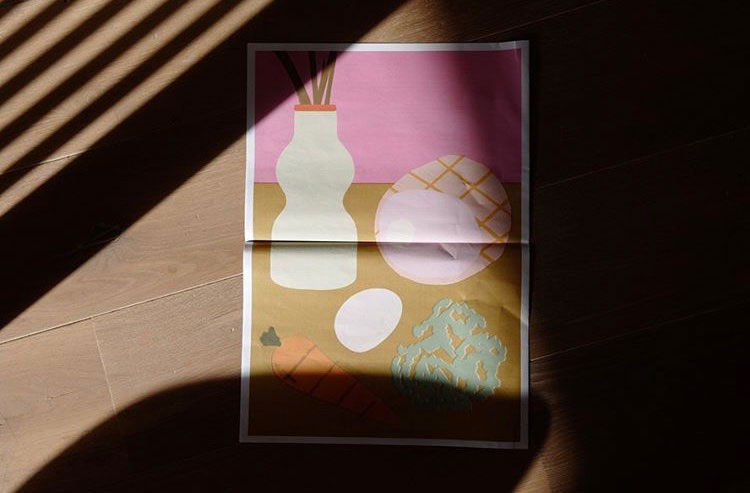 We had the idea for Date about 9 months before we actually published the first issue. I had been visualizing it in my head for a while, so when I started designing it all just fell into place. Each issue takes about a month to get done since it’s just the two of us.

"WE STRIVE TO COLLABORATE WITH
LATINX ARTISTS...IT'S IMPORTANT FOR
ME TO LIFT UP THE VOICES OF MY
COMMUNITY."

We don’t look to other food publications for reference — instead I’m inspired by the utilitarian design of Braun manuals. I knew I wanted Date Paper to feel similarly informative and recognizable. To streamline things I’ve designed the newspaper so that the layout is always the same and only the colors and illustrations change between issues. This helps us put all of our energy into the content, while the design still feels considered.

Illustration by Veronica Cisneros for Issue 2 of Date Paper.

Since this project is a non-profit, we give the illustrators as much creative freedom as possible. We know some of the illustrators personally but a simple email explaining what we are doing usually gets the artists interested. We'll give them a brief about the section they're creating the artwork for, but the rest is up to them in terms of color and what they want to express. We do try to get sketches for the back cover though, since it's so prominent and sets the mood for the entire season.

We strive to collaborate with Latinx artists to promote their work and expand the community’s reach. I’m originally from Mexico, and as an art director it’s important for me to lift up the voices of my community. 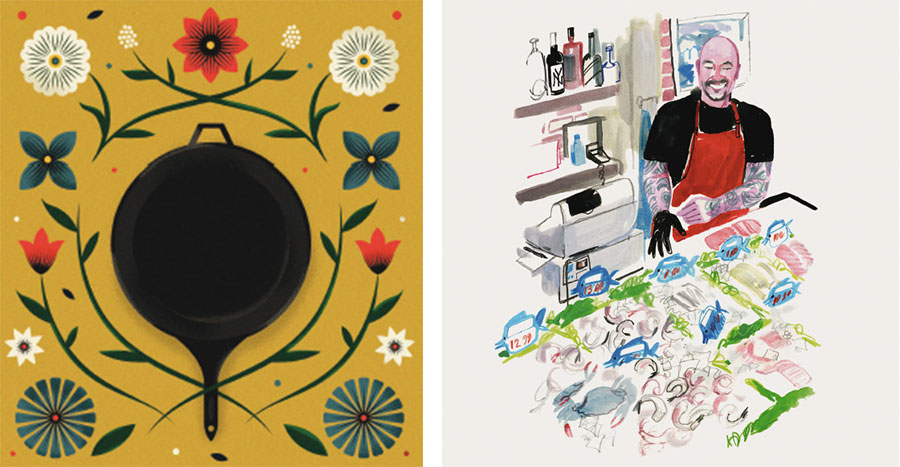 So far we’ve worked with illustrators like Lauren Tamaki, Derek Abella, Elena Boils, Eugenia Mello, Grant Vernon, Bailey Sullivan and Veronica Cisneros. Most are based in New York, except for Elena who is a Mexican artist based in London. They all have been great to work with and I am so grateful that they have shared their amazing talent with us. 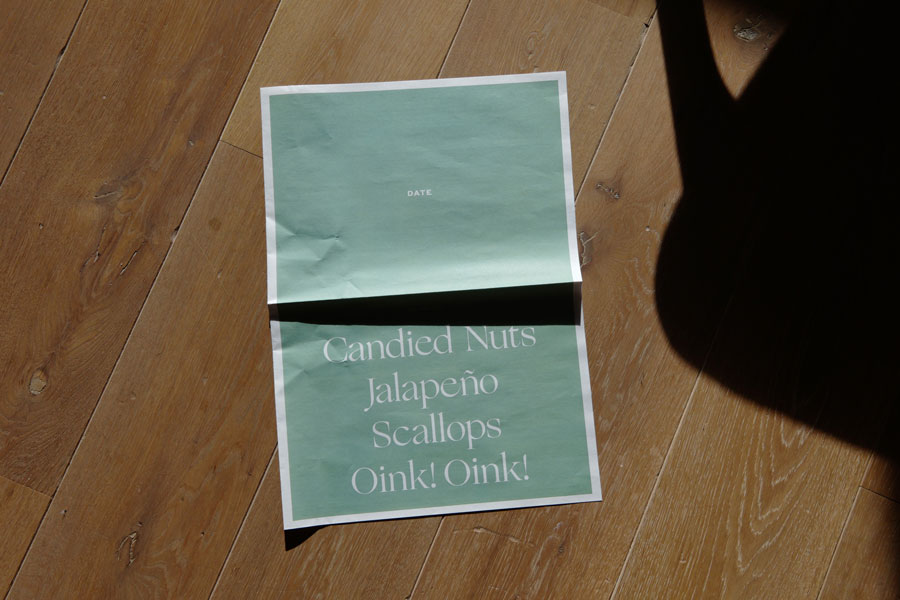 We knew that if we were going to create a print product, we didn’t want it to end up in the recycle bin right away. A large broadsheet format is perfect for people to repurpose in many different ways! Inside each issue of Date Paper we print a friendly reminder with ways people can re-use the newspaper after reading: 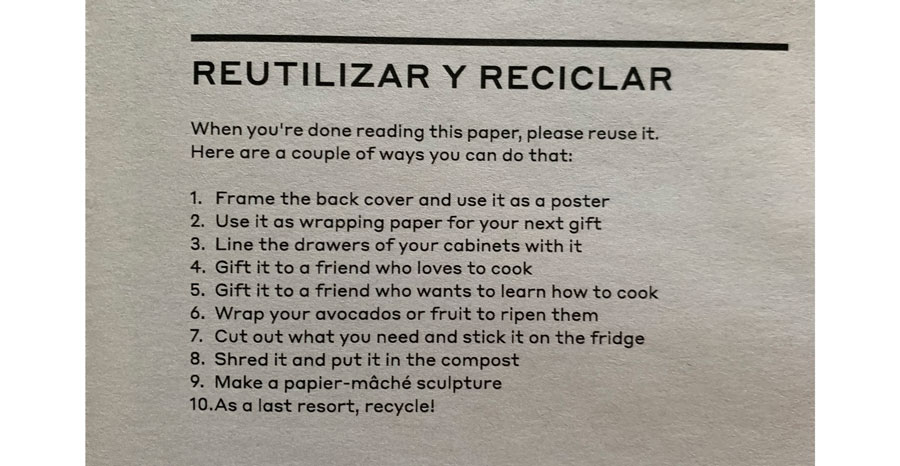 We know we’re not perfect, but this is one little way for us to encourage people not to take the paper that they read for granted.

The response to the project has been great. I never thought people would care about it, but we've gotten multiple messages saying how much readers are enjoying both the design and the food!

"WE KNEW THAT IF WE WERE GOING TO
CREATE A PRINT PRODUCT, WE DIDN'T
WANT IT TO END UP IN THE RECYCLE BIN
RIGHT AWAY."

We set out with the mindset of making a publication that promotes mindfulness of food, the planet, and each other. After only two issues, we are so humbled by the brilliant and kind artists and food pioneers we’ve had the pleasure to talk to and work with. It’s made us closer to our community in ways we would have never imagined, and we are so grateful for this. We’ve seen that people really do care about each other and the planet. You just have to create the opportunity for them to exercise that.

This dish was crafted for a few friends we had over for dinner one evening. One couple are vegetarians, the other are Keto. It was a delightful challenge and we quite enjoyed what we came up with enough to share it with you here! We recommend going to your local farmer's market and finding a colorful variety of heirloom tomatoes for the sauce.

2. Slice the tomatoes in thirds and put them on a sheet pan. Next add the whole poblano peppers, sliced onions, whole garlic cloves and jalapeño halves. Cover the veggies with olive oil, and sprinkle with salt and pepper. Put in the oven and check within 15-20 minutes. Roast until the veggies are tender and the tomatoes are juicy.

3. For the poblano filling, mix the chopped mushrooms, crumbled cheese, and ½ of the cooked onions together. Add salt and pepper.

4. Put the other half of the onions into a blender along with the tomatoes, jalapeño, garlic. Next add the ¼ cup of stock, tomato paste, and your spices and herbs - cumin, coriander, chili powder, oregano, salt, and fresh cilantro. Blend until the sauce is smooth.

5. Next, we’ll prepare the poblano peppers. Once they have slightly cooled, cut a slit from the stem at the top to the bottom and gently remove the seeds while rinsing the peppers under cold water. You may notice the skin start to peel off. Don’t feel the need to manually pull off the skin however. Leaving some or all of the skin on is completely ok!

8. Remove the pan and garnish the poblanos with cilantro leaves.

“This is a great red wine to serve with just a slight chill (chilled, not cold)... great for both easy summer drinking and with fresh, spicy dishes. This wine is made by an organic cooperative in southern France—which explains the great quality-to-price ratio. Savory, juicy red fruit with just the slightest crisp-crunch to it.”