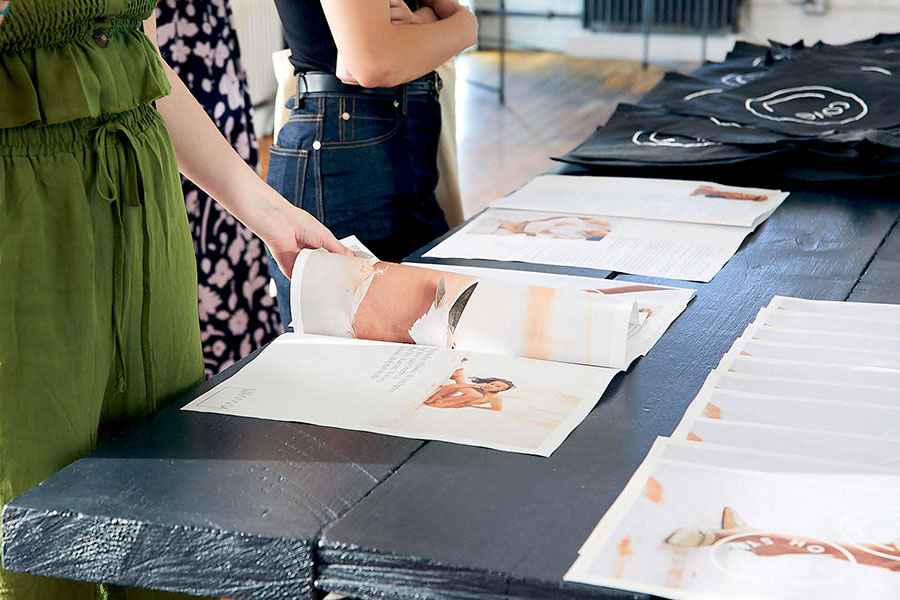 As a student, Cove founder Geri Dempsey felt frustrated that big media outlets seemingly "only picked up on creative graduates in London." She launched Cove in 2017 to champion work out of Ireland, her home country — today the magazine celebrates "the Irish mentality and spirit" while helping emerging creatives around the world reach a wider audience. "Knowing that companies are using Cove to find new talent is all we ever hoped for," says Dempsey. 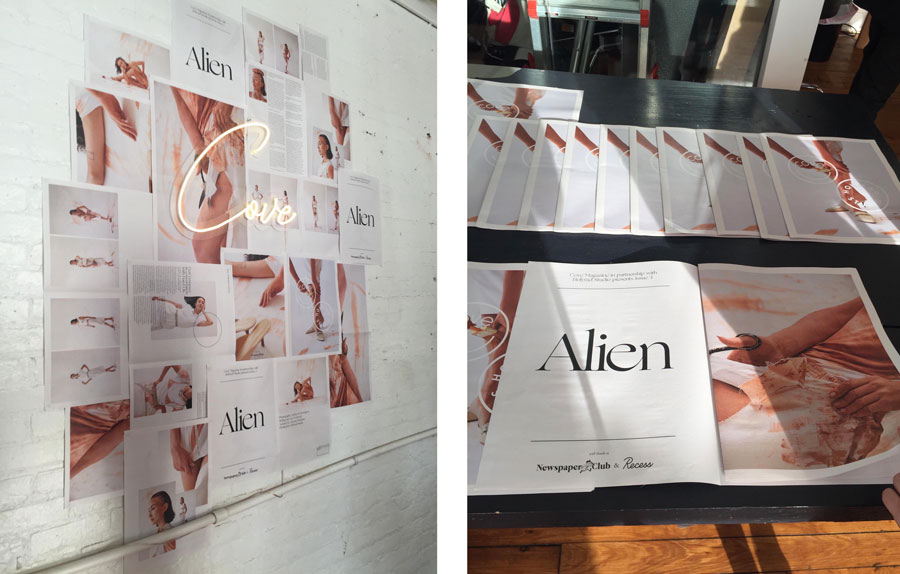 Issue 3 of Cove comes out in September, with contributors responding to the theme "Alien." For a pre-launch party last month, Dempsey used our digital tabloid newspapers to give a preview of the issue (and also pasted pages onto the wall to make a DIY photobooth backdrop). 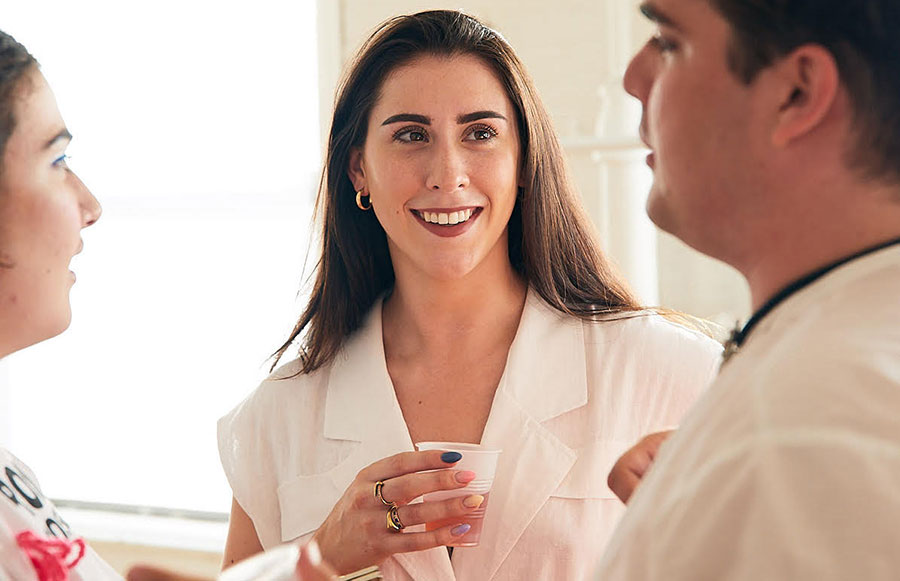 Below, Dempsey tells us how Cove has evolved, the significance of Irishness to the magazine, and why, after three issues, publishing a creative's first feature in print is "still a thrill."

How did Cove get started?

I started Cove right out of university in 2017 and didn’t have major aspirations aside from making it a single issue experiment.

I’ve always been interested in shining a light on Ireland and its creatives. I moved to London to study fashion business as there weren’t any courses available in Ireland in the fashion industry aside from fashion design (which is definitely not my strong suit). 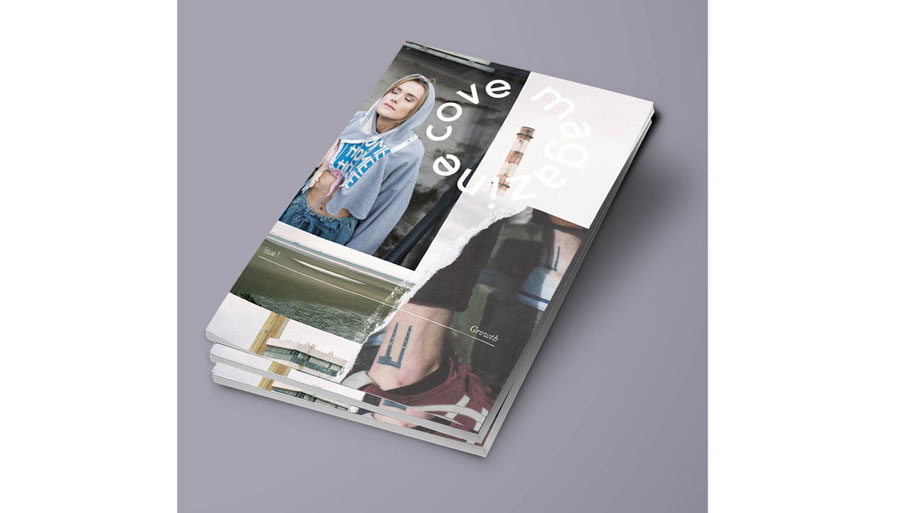 Issue 1 of Cove magazine on the theme of growth. Image via Cove.

During my time in London I watched as huge media outlets like i-D, Dazed and Vogue only picked up on creative graduates in London. Those in Ireland or otherwise outside of London were consistently overlooked. I brought some friends on board and produced our first issue of Cove filled with student and graduate work across all areas, including design, photography, styling and writing. 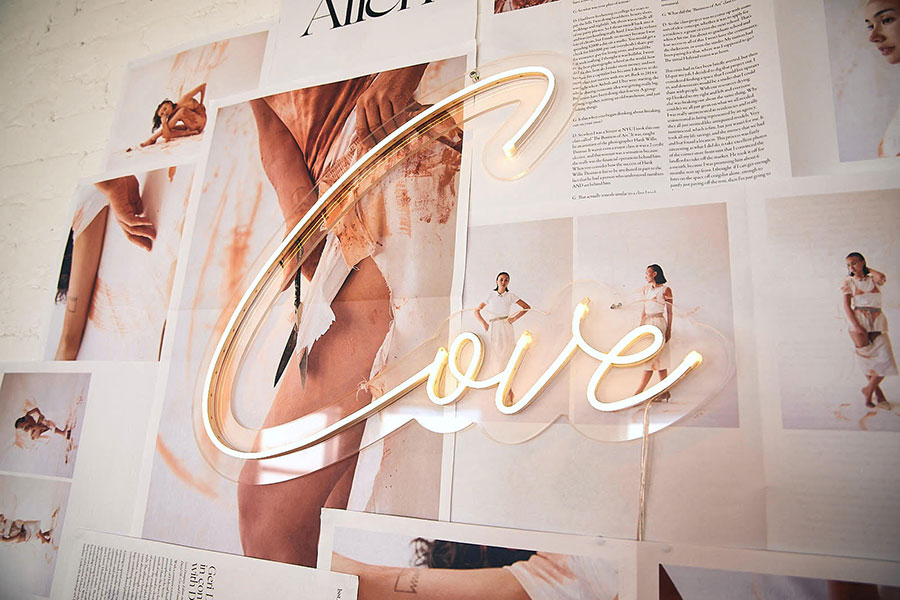 Cove's slogan is"Iarracht comh phairteach”. How important is Irishness to the identity of the magazine?

Our slogan “Larracht comh phairteach” loosely translates to “a joint effort” – that’s what gets every issue of Cove to completion. I had initially wanted to go with “Comh” (pronounced as “cove”) for the title of the magazine, but decided to keep things easy for everyone. 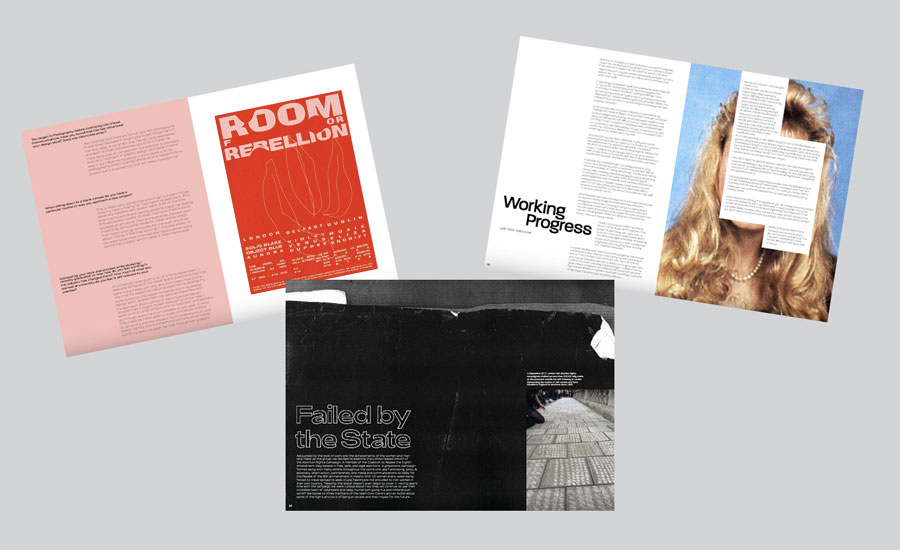 Spreads from Issue 2 of Cove. Images via Cove.

Irishness is crucial to our identity, but as we’ve grown I’ve let the scope expand. The first issue of anything is a trial run – Issue 1 of Cove wound up being a collection of work exploring Irishness. For Issue 2, we shifted focus towards a more global voice and let our Irishness be a subtle, but still integral, undertone.

"Our slogan “Larracht comh phairteach”
loosely translates to “a joint effort” – that’s
what gets every issue of Cove to completion."

We’ve always been loose with the definition of what it means to be Irish. While a lot of our contributors were born in Ireland, others are Irish in different ways – they’ve moved here from abroad and are doing a lot for our community. We celebrate the Irish mentality and spirit, regardless of where someone was born.

How do you feel the magazine has changed since it first started?

We’re still so young and each issue has grown alongside my design skills. I think people can get stuck in the institutional and business elements of it all – for a time I was bogged down by industry standards and had the voices of lecturers ringing in my head. Once I let go and actually focused on enjoying design, everything got easier. 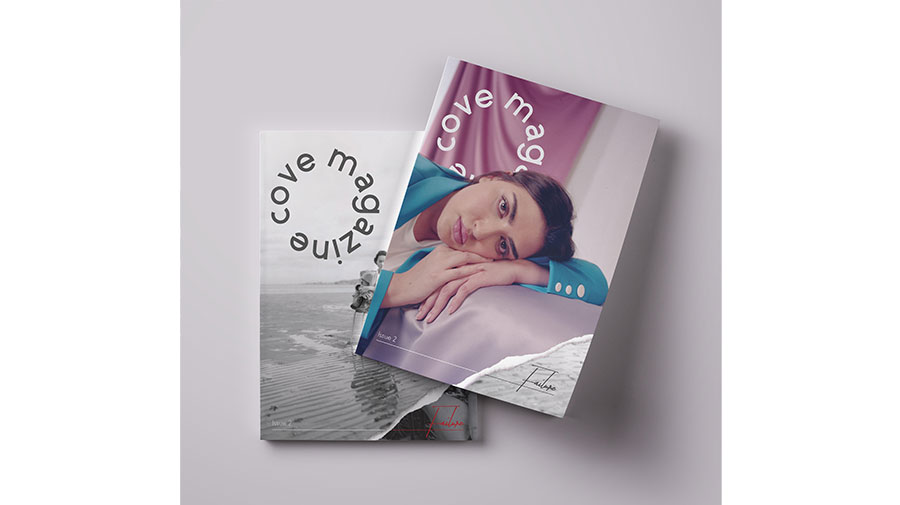 Issue 2 of Cove magazine focused on the theme of failure. Photo via Geri Dempsey.

Collaborating with contributors from different cities has improved our content immeasurably. Also, broadening our scope to include a wider range of contributors – not only students and graduates – has added substance and made it all the more interesting for younger readers by showing them what they can aspire to.

Is there a major mistake or success that stands out over the course of making the magazine?

Our biggest success has honestly been the support we’ve gotten from stockists who believe in our voice and what we’re trying to do. We also heard success stories from contributors who were featured in our first few issues and then got further opportunities because of it. Knowing that other people and companies are using Cove to find new talent is all we ever hoped for.

"A newspaper was the ideal way to give a
preview of the new issue – it was affordable
but also made an impact. "

Giving someone their first feature in print is still a thrill. As a very biased print lover, you can’t beat being able to hold it in your hands. We want to give people who might normally not get that opportunity a chance.

Of course, there have also been failures. Printing the entire first issue with an extra page at the front which resulted in the entire layout being out of order was definitely a teachable moment. You never stop learning I suppose! 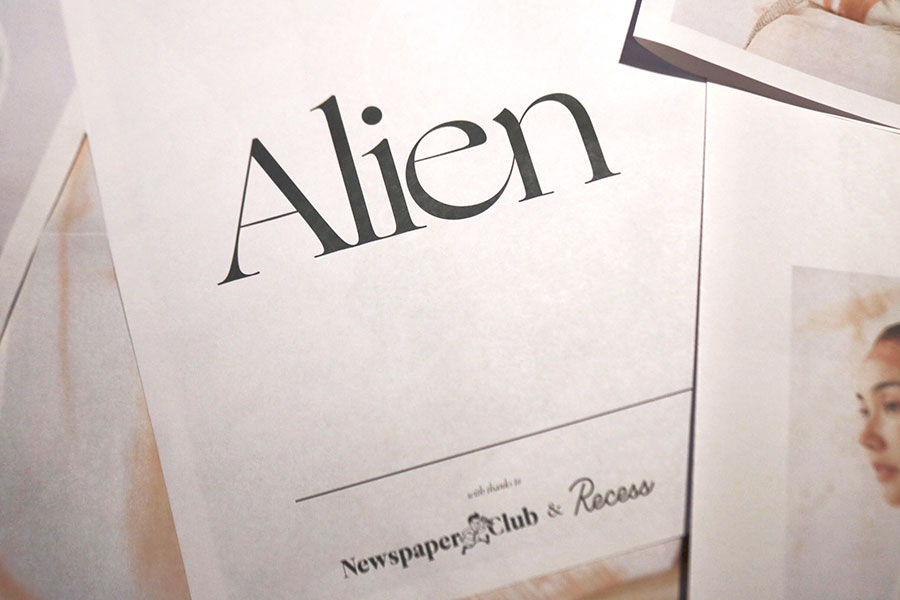 How did you choose the theme "Alien" for Issue 3?

Our themes often emerge from the current climate as we begin preparing for each issue. They generally reference emotions or feelings experienced by people who have moved from the place where they grew up, but I enjoy letting contributors take a theme and run with it.

"Knowing that companies are using Cove to find
new talent is all we ever hoped for."

Failure (Issue 2) was interesting as the pieces ended up focusing less on personal failures and more on systemic failures. One of my favourite features was “Failed by the State”. It’s a series of interviews with members of the London Irish Abortion Rights Campaign, the group that fought ferociously to change the law surrounding abortion in Ireland. They encouraged emigrants to return #hometovote, which was acknowledged as a huge factor in helping to pass the referendum. 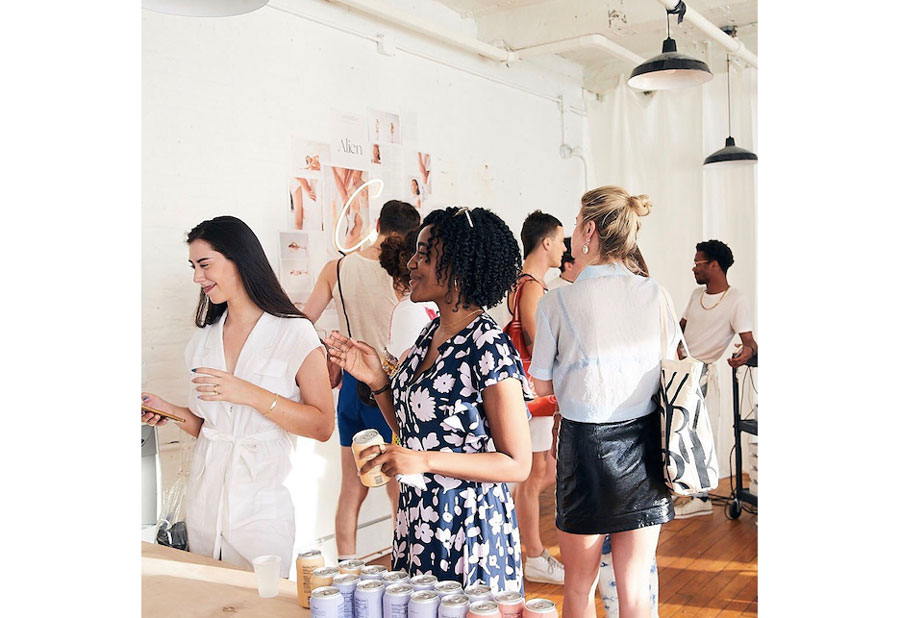 Launch party for Issue 3 of Cove, hosted by Holyrad Studio.

With so much happening around the displacement of communities across the globe, what it means to feel “alien” seemed like a powerful idea to explore. We encouraged contributors to consider words surrounding the theme, like alienation, isolation, distance, and separation.

Why did you decide to print a newspaper for the launch of Issue 3?

A newspaper was the ideal way to give a preview of the new issue – it was affordable but also made an impact. The newspaper fit into our tote bags and allowed everyone to take home a little piece of Cove.

"Giving someone their first feature in print is
still a thrill. You can’t beat being able to hold it in
your hands"

I designed the newspaper to include a pull-out poster that could be displayed on its own, but the layout of each spread could also be a standalone print. 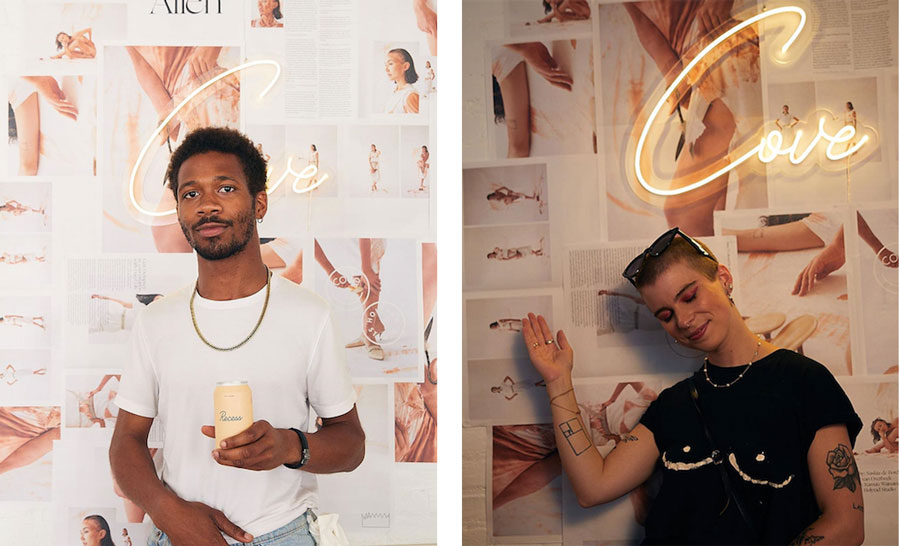 For the launch party, Cove created a photobooth background from collaged pages of their newspaper:"It turned out to be one of the highlights of the space that evening." Photo via Holyrad Studio.

It was such a pleasurable project to work on as I rarely get to work with such large formats. We also repurposed the newsprint by collaging it behind a neon sign of our logo as a photobooth backdrop. (pictured above). When I received the delivery, I had already been planning to have a collage of images somewhere at the event and didn’t waste any time plastering them all over the walls. It turned out to be one of the highlights of the space that evening. (Remaining copies of the newspaper are for sale on Cove's website.)

Could you tell us about the idea behind the cover image for the newspaper?

For the US part of the issue we collaborated with Holyrad Studios, a creative agency that provides affordable access to production space, professional development, and links to the industry network.

The cover was shot in Holyrad Studios, and envisioned by Holyrad stylist Joe van Overbeek. We wanted the imagery to reflect the interview between myself and Holyrad founder Daryl Oh, which slowly peeled back layers to get into some deeper topics. 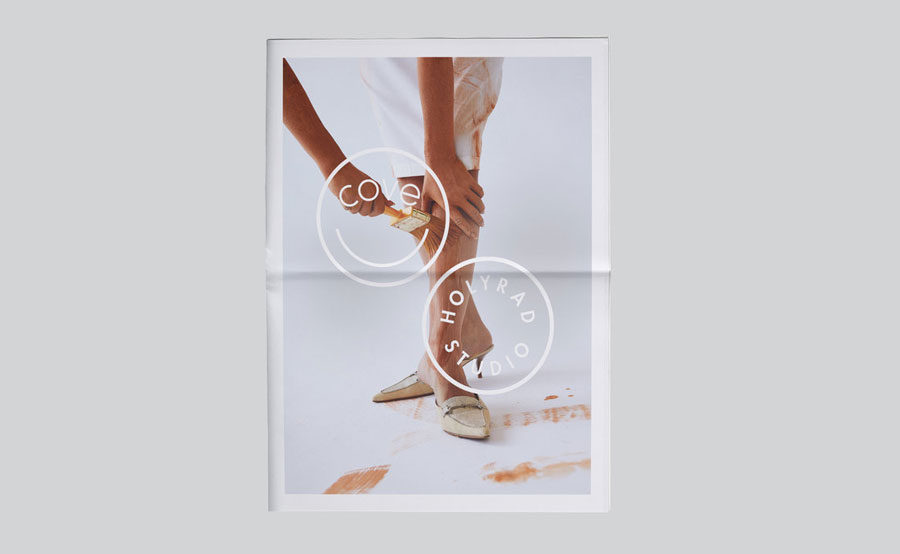 While on the topic of covers, for Issue 3 of Cove there will be three covers. (There were two for Issue 2 and one for Issue 1 – we’ll probably have to stop this nonsense if we go past Issue 5).

I remember hearing a panel of editors and creative directors at one of Stack Magazines’ podcast recordings discussing whether it was clever or just lazy editing work to do multiple covers, but for us it’s just a fun new design challenge.

"We repurposed the newsprint by collaging as a
photobooth backdrop. It turned out to be one of
the highlights of the space that evening."

We shot with the incredible @fishfiorucci in the Texas desert and those images will be on all three covers. Fish is a model and native of Brownsville, Texas who actively supports emerging creatives in their community. They were recently featured in Lady Gaga's campaign for her new make-up line, Haus Laboratories. We couldn’t be prouder to work with them.

What are some highlights from this upcoming issue?

Without giving too much away, we have a feature highlighting fresh fashion graduates from the Limerick School of Art and Design. So much of the coverage around graduate fashion centres around Dublin and its art colleges, so we wanted to showcase the amazing work that’s happening elsewhere in the country. 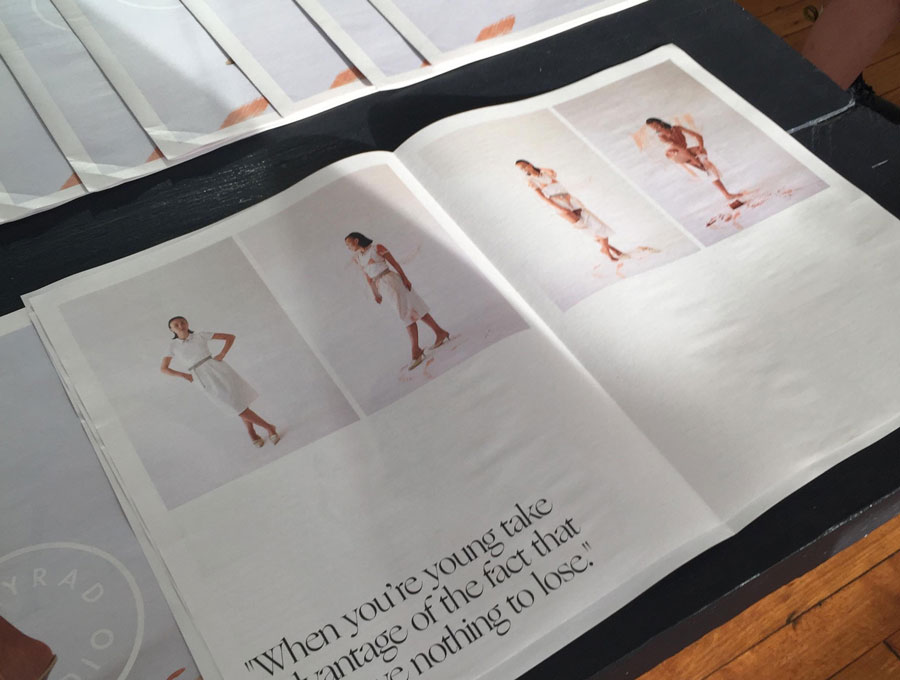 There’s also a shoot by photographer Dani B titled “Neighbourhood Stage”. It’s a skilful interpretation of our theme that aims to reclaim ghetto culture and communicate its place in the fashion industry. As Dani writes: “I’m here to make sure [black people from the ghetto] are included and feel proud of where they are from, despite their hardships. Because without them most trends in the fashion world would not exist.”

What's next for Cove?

We’re launching Issue 3 in September, which will be a joy and a relief. We’re hoping to organise some events to coincide with the launch so if you find yourself in Dublin around then please keep an eye out! 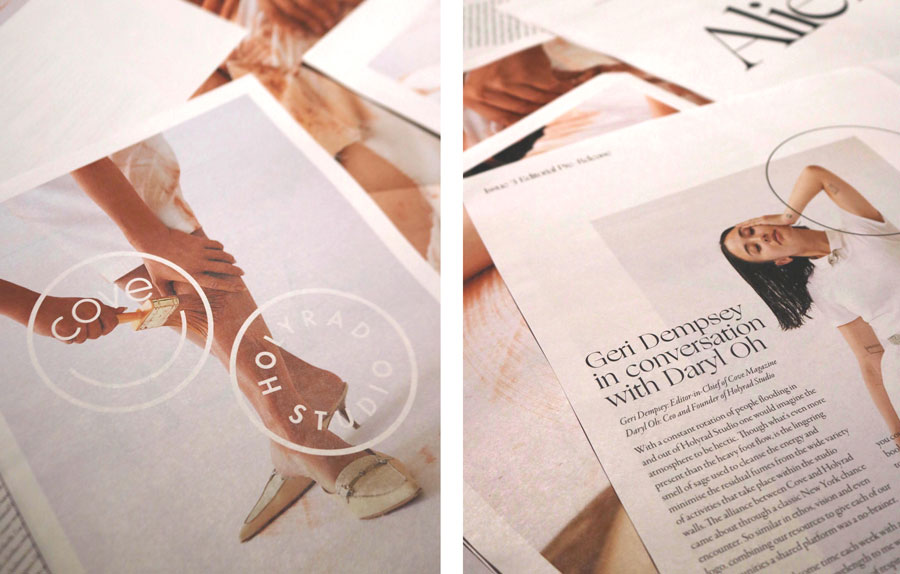 From the outset I’ve envisioned Cove as a finite series of 5 issues. The UK, US, Australia and Canada are the regions with the highest amounts of Irish diaspora so we’re hoping to tackle cities like Edinburgh, Vancouver, or Melbourne for our final two issues. But who knows where we’ll go?

I’ve really enjoyed working with print, and if we can keep finding ways to produce Cove it may be able to evolve yet again.