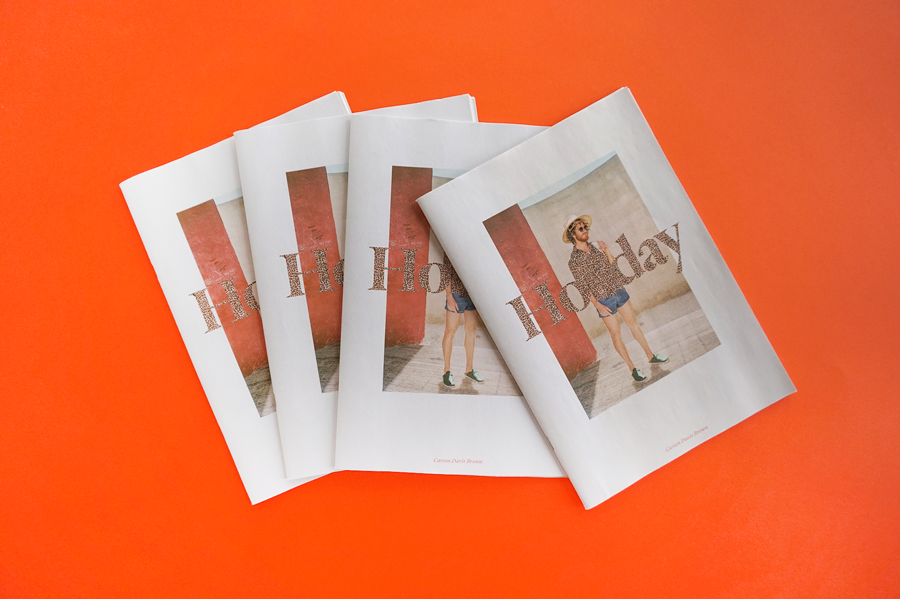 Carson Davis Brown is a Los Angeles-based photographer and artist. In 2015, he was awarded a VSCO Artist Initiative grant for New American Quilts, a series of installations created in big box stores including Walmart and Target. Brown rearranged shelves of retail products into quilt-like patterns, photographed them, and had the images woven into blankets using one store's personalised gifts service.

Since then, Brown has worked with brands like Herman Miller and Chaco while maintaining a personal photography practice. He recently used our digital minis to publish his photozine Holiday, which documents a summer trip through Europe. Here, Brown talks to us about the importance of unstructured time, his reluctance to share work on social media, and the joy of printing something for yourself.

I work with a mix of analogue and digital cameras. My commercial work is almost all digital, but I enjoy shooting on film for myself. The images in this newspaper were all shot on film with a Yashika T2 and a Canon Elan 7. I find the limitations inherent in shooting on film such a pleasure to work within. 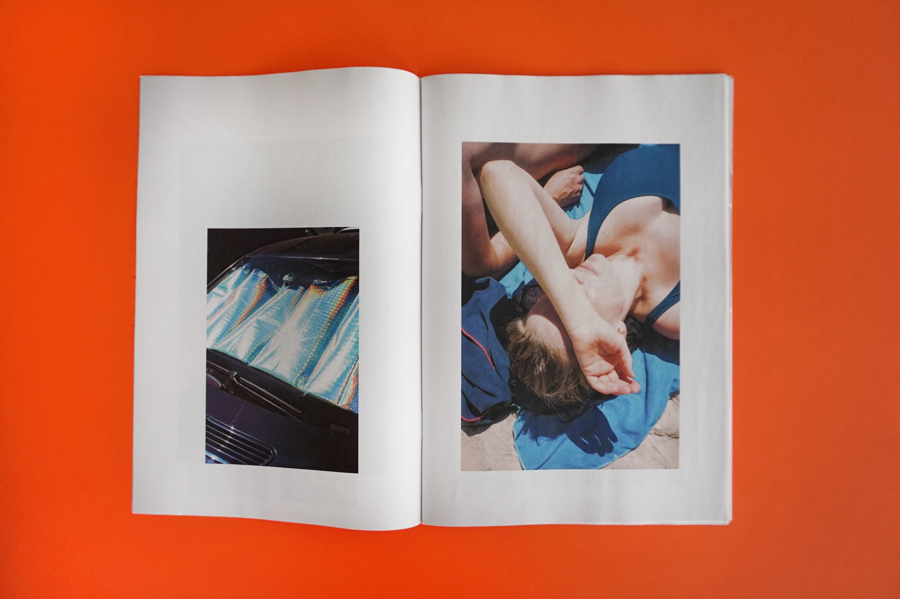 Sometimes you’re not really aware of the impact something has on you until you move away from it. A lot of my work focuses on consumer environments – big box stores, superstores, etc. I started documenting these places when I lived in Grand Rapids, Michigan, which is the birthplace of the “superstore.” These spaces were so familiar to me growing up that I didn’t realize how significant they were to my work until I moved to California, where you see fewer of them. 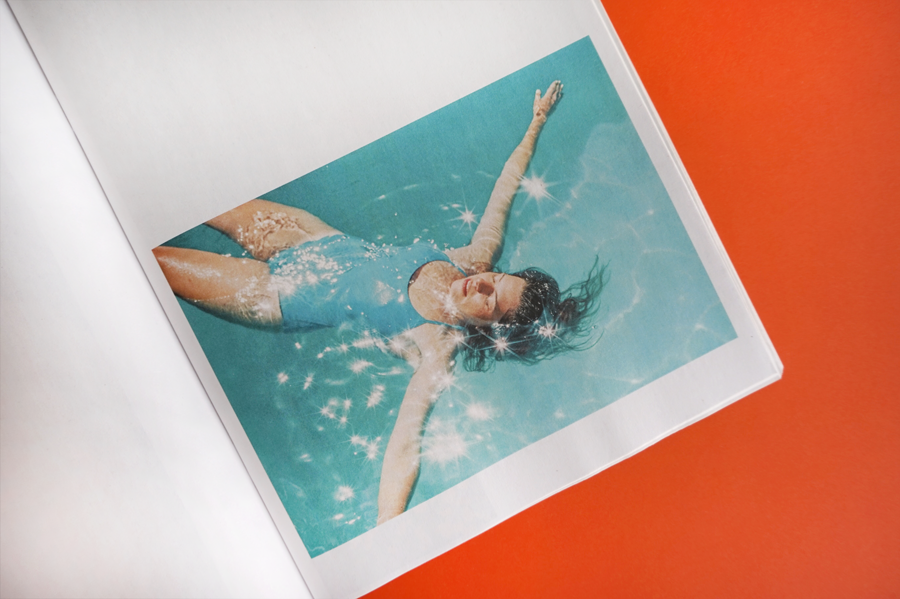 The work in my newspaper came from a holiday trip through Europe—first Portugal and then Berlin, Milan, the Alps and finally London. I titled the series Holiday, a word that has really evolved to have a double meaning for me. Outside of this trip I work a lot, and the year leading up to the trip was one my busiest and hardest. I was overwhelmed by the pressures of my personal and commercial work and needed a holiday from it all – from the client requests that sometimes dictate my process and from my own need to control the story around my work. 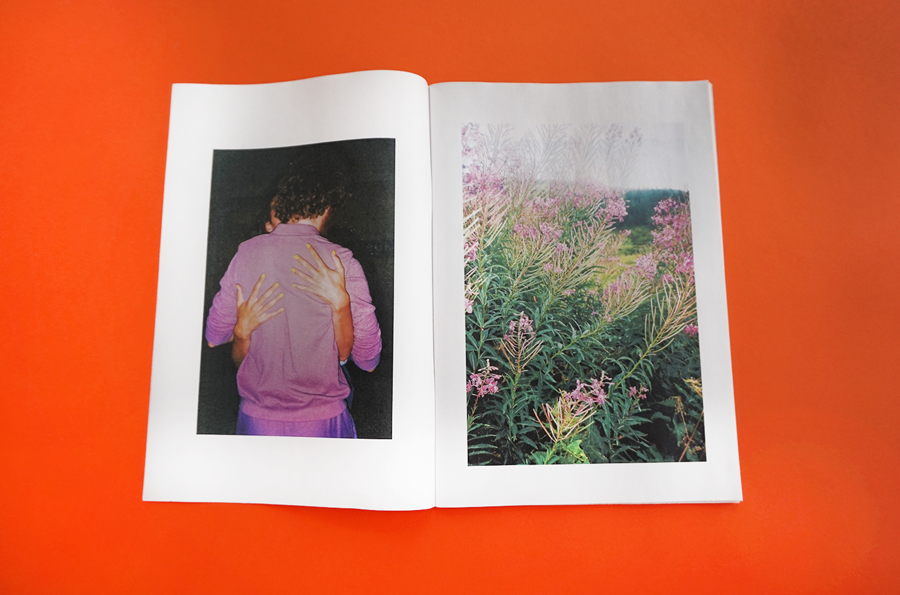 As an artist who supports himself through a commercial photography practice, I have a love-hate relationship with photography. There is so much around the craft and process of photography that I have come to love. Yet in a time where technology and access have created a flood of content that feels repetitive and lacking a point of view, there's a lot I find to be uninspiring.

I continually question the photos I create and why I create them. I often find myself paralyzed, sitting on hundreds of photos and hesitating to share. I’m always aspiring to more substance or a different way of seeing the world and questioning whether my work is doing that. 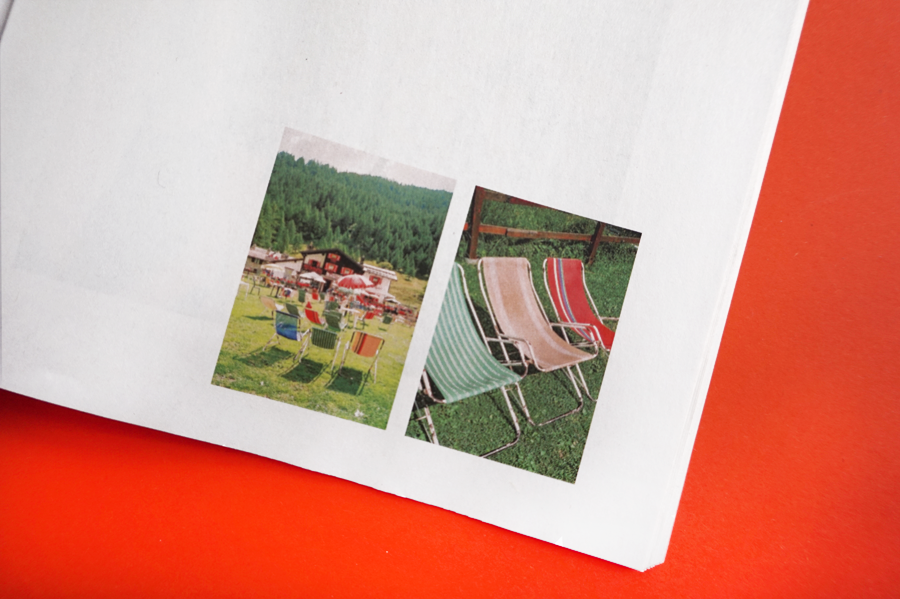 I have a hard time sharing things on social media because it feels like a space of overconsumption and lost content. I specifically wanted to use newsprint because it feels accessible and significant but not overly precious.

Printing my photos in a newspaper helped me rediscover my creative process. The act of play is instrumental to my work, and I came to understand that if I give myself the openness to explore – free of judgement – I can really enjoy making photographs. Looking at the body of work I created during this “free time”, I’m delighted by the story that emerged. 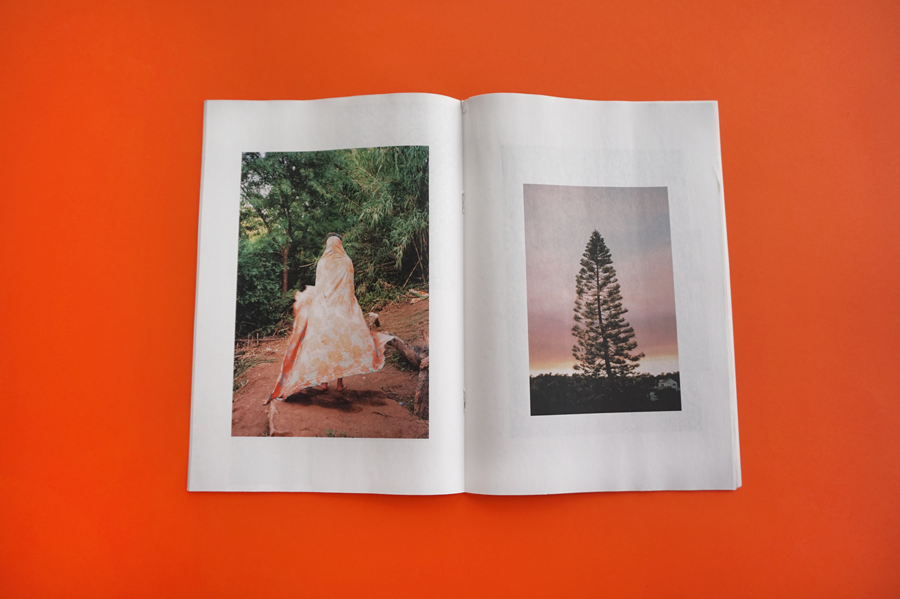 It’s been so fun to share my newspaper with fellow photographers, photo editors and publishers that I admire. I’ve created something that feels personal and truly reflects the things I enjoy without the expectation of a specific response. Instead the newspaper is something I can offer to a community that I appreciate. I’ve gotten a really positive response, it seems people are really liking it. 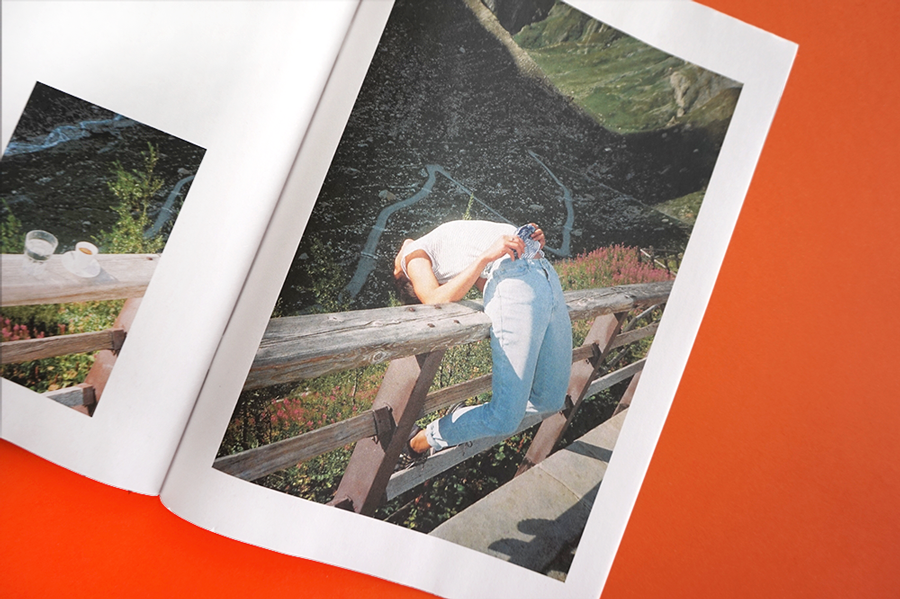 One of my favorite images in the newspaper is toward the end — it's a girl stretching over a railing (pictured above). It’s actually one of my favorite photos I’ve taken in a while. That’s Frances, a new friend at the time who met me in Milan and we drove out to the Alps to backpack. We hiked into Switzerland from Italy, stopping in rifugios along the way for espresso and wine. At the last rifugio before the hike into Switzerland, I turned around and Frances was stretching over the railing in a peculiar way. That image encapsulates a wonderful day. 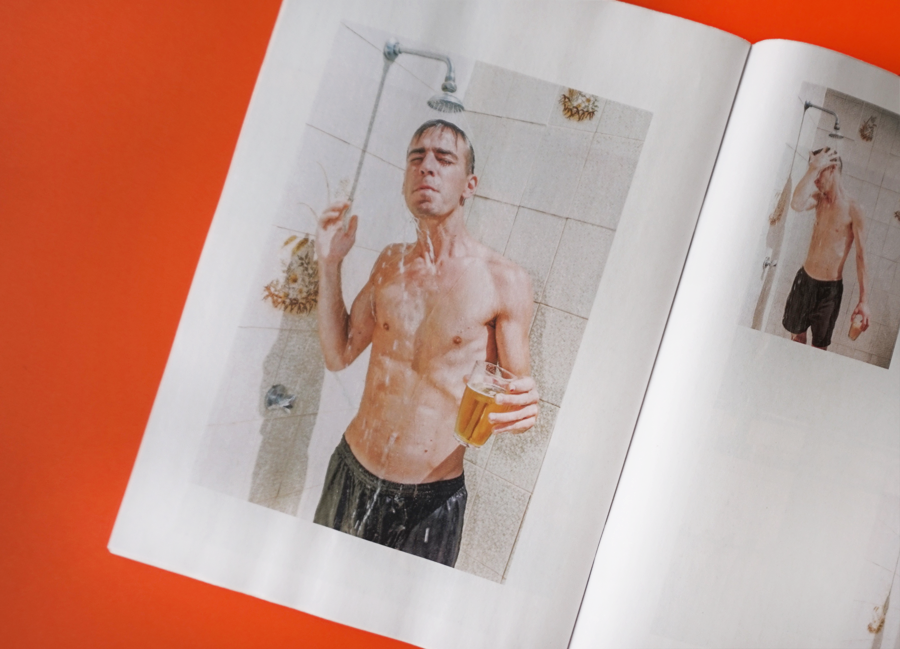 It’s such a delight photographing someone who isn’t a model in the traditional sense, but is natural in front of a camera and takes direction well. That was the case with the photo of a friend having a beer in the shower (pictured above). That's Maarten in Portugal, getting ready to swim in the pool. He’s an artist living Brussels (also a wonderful chef!)

I don’t always do the best job of sharing what I’m up to. In the past year, I was able to direct the video portion of a new chair released by Herman Miller. That was exciting – we had a really talented team and I thought the art direction was strong. I was also able to spend a month in Alaska for a couple projects with Chaco Footwear. It was an unbelievable trip and I was excited about the work that came out of it. But this Holiday zine is definitely the work I’m most excited about recently. 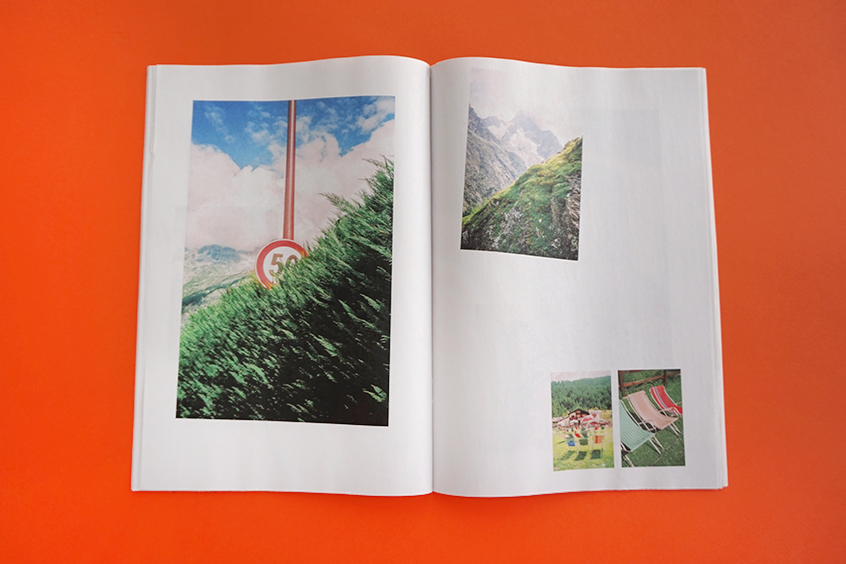 Some of my favorite photographers working today are Thomas Prior, Sara Cwynar and and Yuan Xiaopeng.

If I were to pick a favorite place to read a newspaper...this is probably pretty standard, but it would be our kitchen table with some coffee or an airplane. 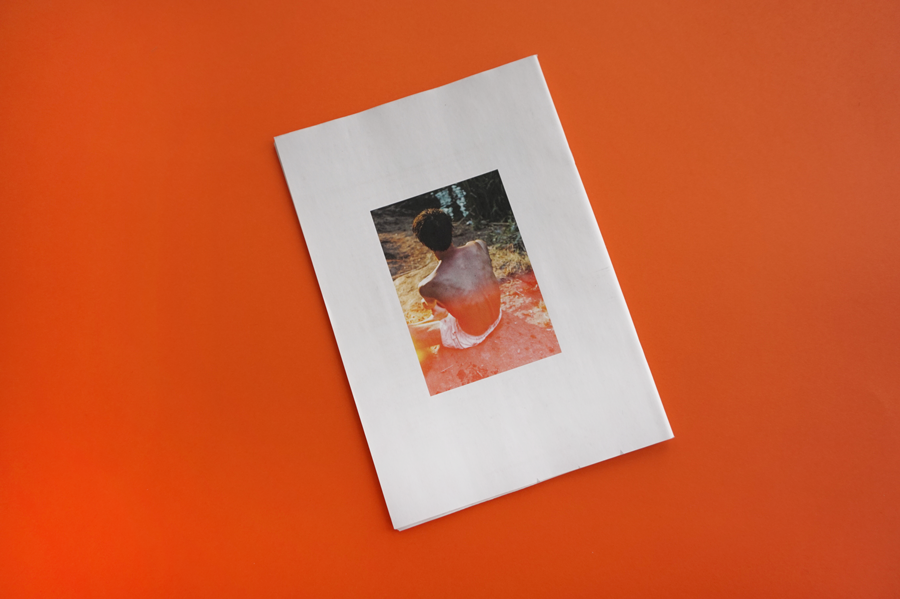