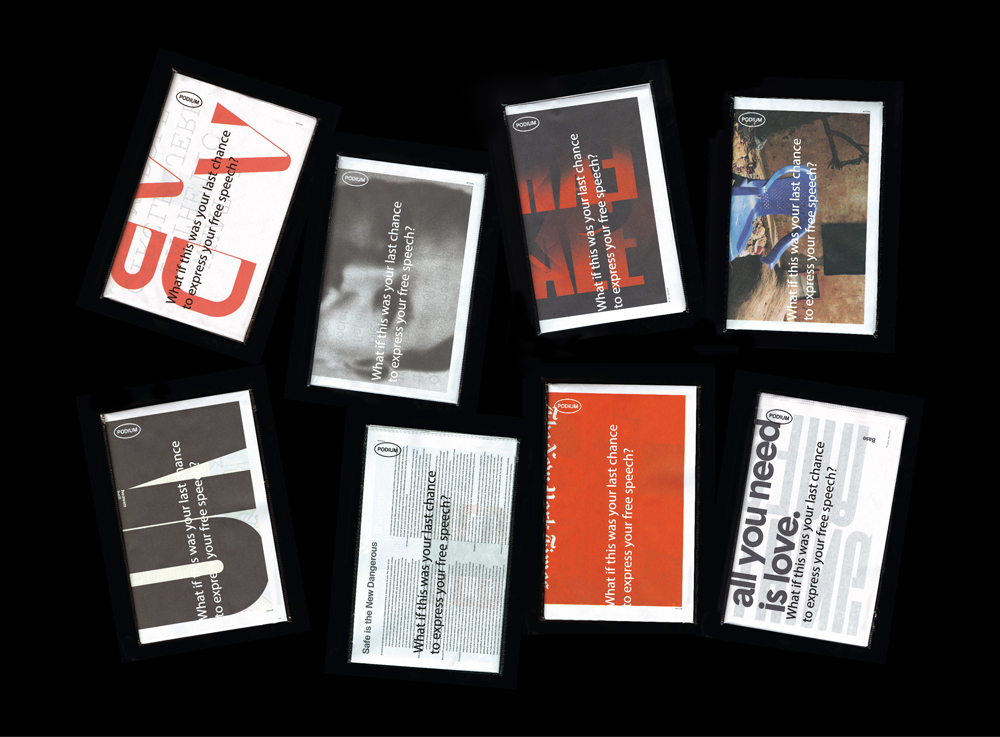 How would you use your last chance to express free speech?

That's the question posed in the first issue of PODIUM, a new publication produced by MA Visual Communication and Digital Direction students on the Collaborate or Die! elective.

Renowned designers and thinkers from around the world were asked to submit a single-page response, and the 30+ works have been published in a digital broadsheet. Contributors include Marion Deuchars, Kenneth Goldsmith, Nick Asbury, Sascha Lobe, Patrick Thomas, David Hillman, and Collaborate or Die! course leaders Astrid Stavro and Adrian Shaughnessy.

Below, the students behind PODIUM tell us how the newspaper came together and how the flexibility of the format—the pages are arranged in a different order in every copy—helped "break down hierarchy within the publication". 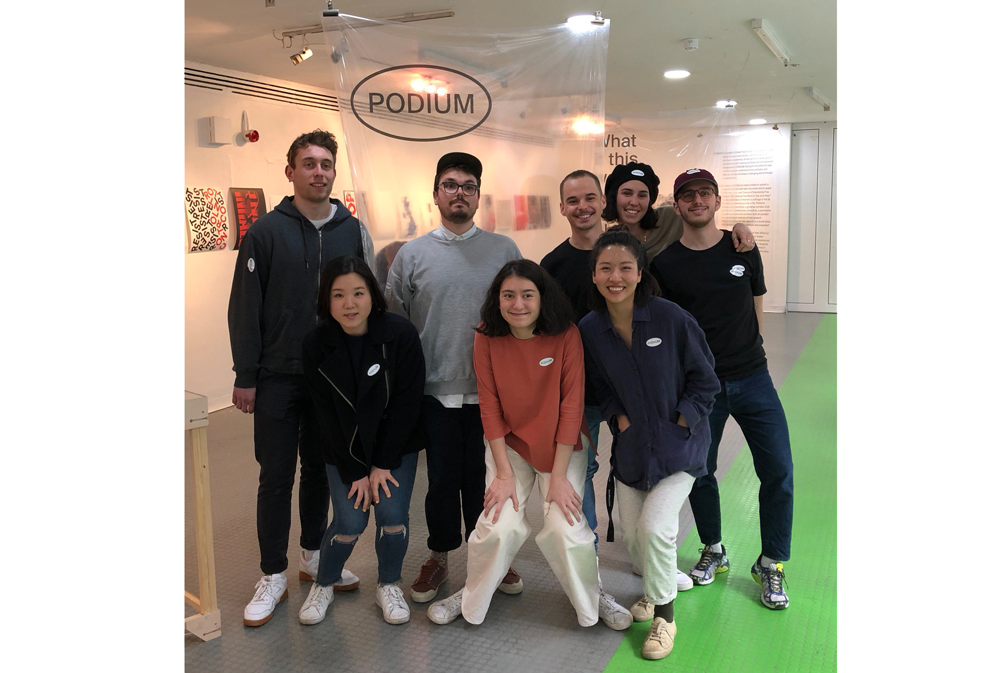 RCA "collaboristas" who made PODIUM newspaper at the exhibition in April. Image via @AJWShaughnessy.

PODIUM is a collaborative, free publication investigating counterfactual thinking in the context of free speech.

The content was produced by contributors from various creative backgrounds—illustration, graphic design, journalism, writing and photography. Every contributor had the chance to respond to the same question: “What if this was your last chance to express your free speech?”

PODIUM highlights the different ways in which people understand the complex and difficult climate of today’s changing world through a creative lens. 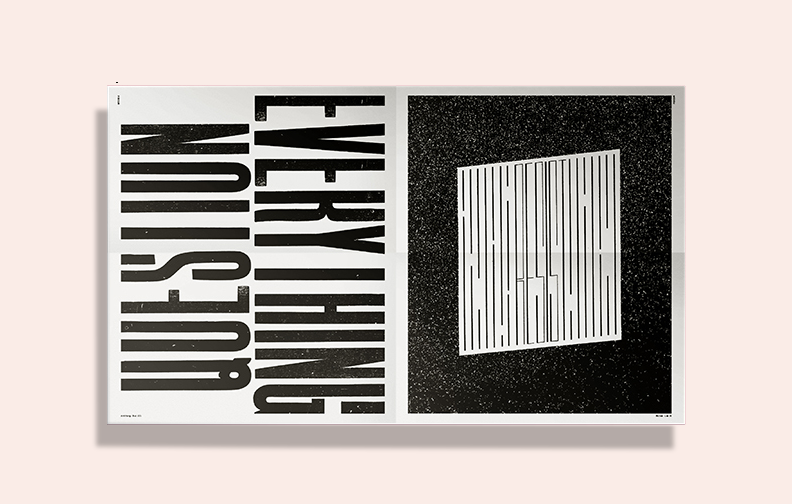 Why do you think free speech is an important issue for designers right now?

The creative industry has the power to use their craft to open new dialogues and create a new sense of understanding complex scenarios—such as free speech—especially if they are under threat.

By critically questioning the reality we live in, we are able to challenge the status quo and raise awareness of cultural and political issues. What is the value of free speech in a world where this freedom is both weaponised and exploited? 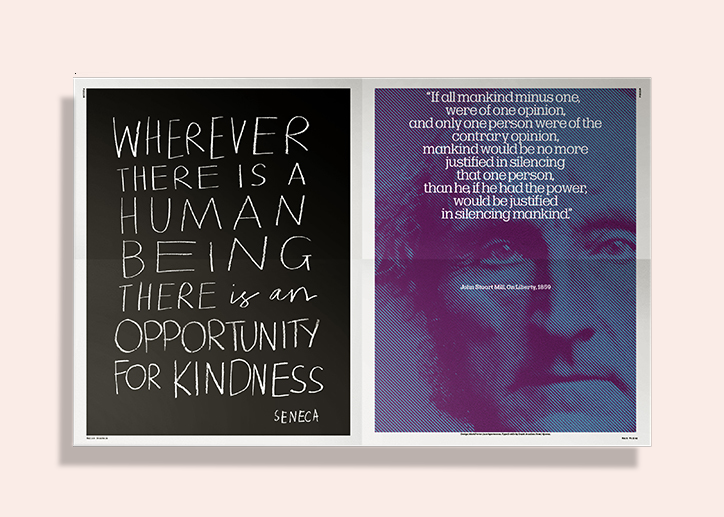 Were the contributors given any other constraints on what they could submit?

The project evolved very organically, so there were no clear constraints from the beginning. The only real constraint was the format of the publication.

How did you find so many amazing contributors? Are they mostly based in the UK or from around the world?

We reached out to numerous creative practitioners all over the world, living and working in different political and social environments. We were able to get in direct contact with the most influential creative minds in the industry. It was a true collaboration between students, professors, and we’re proud that so many people accepted our invitation to contribute. 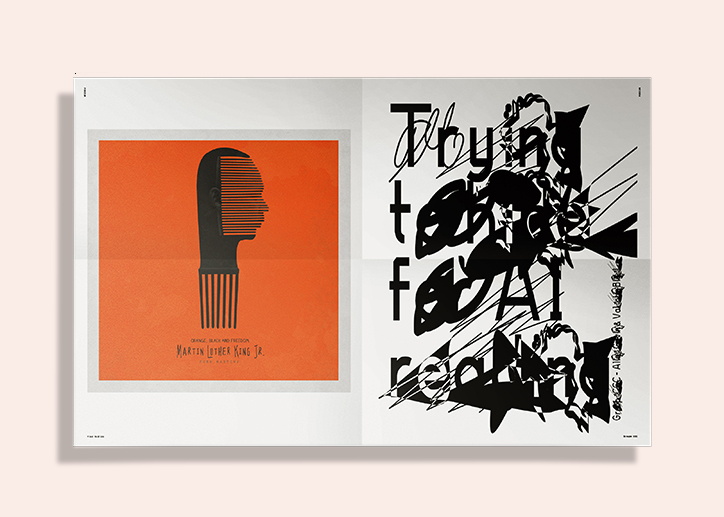 Why did you publish PODIUM as a newspaper?

The format of the newspaper and its loose arrangement of pages represented the essence of what we were trying to achieve. Historically newspapers have always had the power to distribute knowledge to a wide audience.

The impromptu, raw method of producing and distributing was in line with the main topic of this issue of PODIUM. We were also able to shuffle the pages so that every newspaper has a different arrangement of spreads—this helped us to break down hierarchy within the publication. 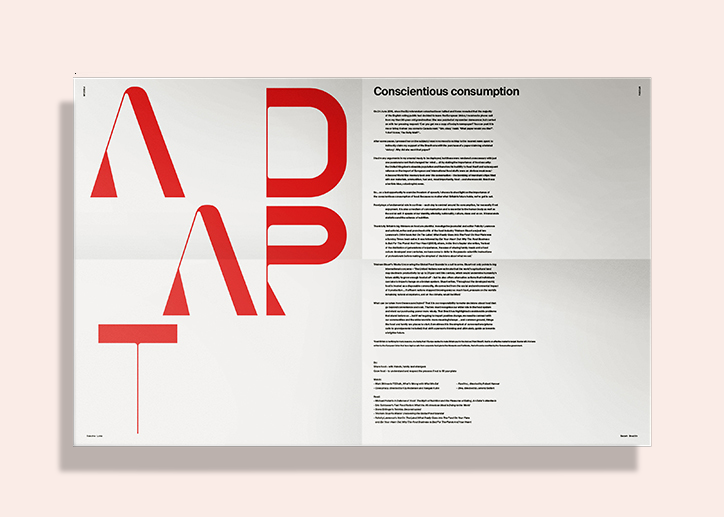 How did the medium affect your approach?

Print mainly affected our approach in terms of technical specifications. We had to make sure that format, resolution, color, etc were right. You can’t correct mistakes after everything has been sent to print! So there were countless loops of proofing, spell checking, color adjusting, and format testing until we were finally ready to print.

We also had to find a way to fund the whole project. If we had kept it digital only we wouldn’t have had any production costs, but we felt like translating the content into print gave the project at sense of “manifestation”. We wanted to create something meaningful and valuable, not yet another “student publication” but something that people would actually want to read and keep or share with others. 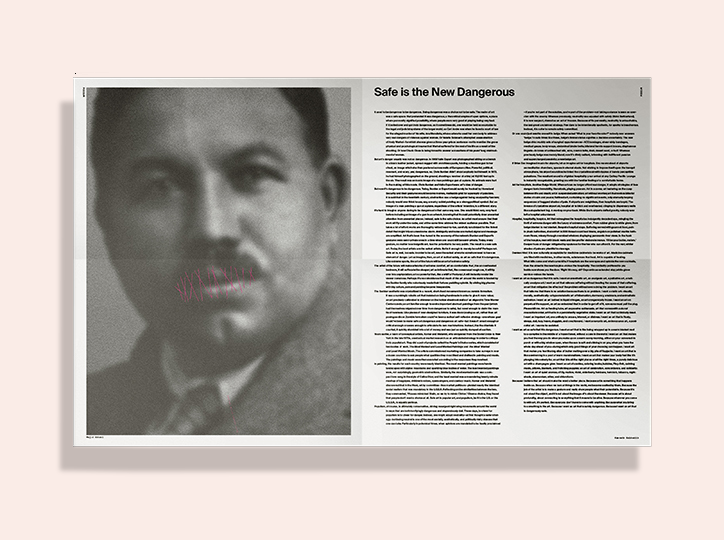 Can you talk about the process of putting the newspaper together?

Within the team, everyone was assigned a role but final decisions were always made collaboratively. We were lucky that the energy within the group was always positive and project-oriented.

The editorial team focussed on choosing the right words and dealing with the rationales that were sent along with the artworks. The design team was responsible for the look and feel and production of the publication. The contributors team reached out to contributors and managed all internal and external communication.

Since we were on a tight budget, there was a lot of DIY work involved: screen printing the transparent sleeves, cutting and shuffling the newspapers, compiling everything together and finally distributing it. 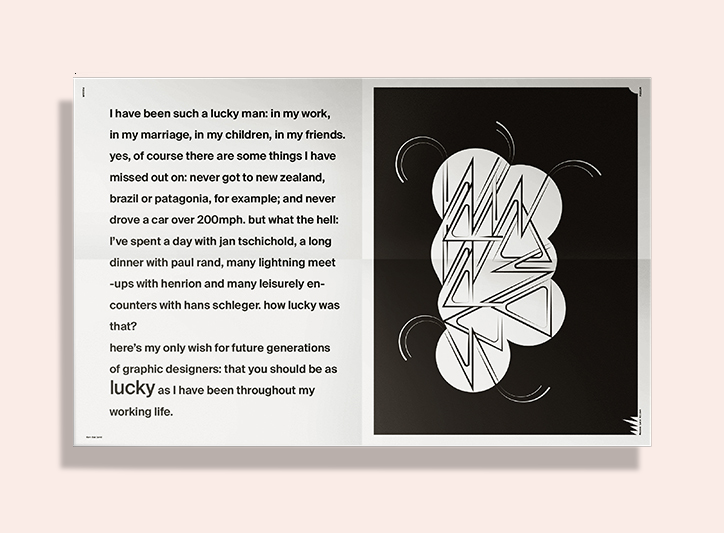 PODIUM is a really interesting mix of different styles. How did you decide how to present/organise the work—is the order of the images intentional or can they be read in any order?

The first step was to organize all the contributions alphabetically and place them within the layout. That already created an interesting mix of styles and content.

Since we don’t have any pagination, PODIUM can be read in any order. To encourage that even further, we shuffled the pages of every issue randomly, so the reader gets an “uncurated” and “unbiased” order of contributions. The idea was to be able to start with any page of the publication and spark new ways of thinking. 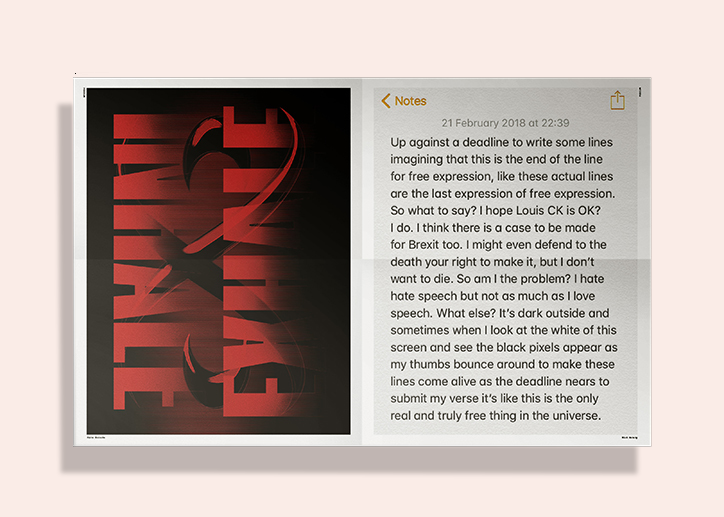 How did you come up with the title PODIUM?

PODIUM for us represents a platform, literally and metaphorically. A physical podium is a space where people share their knowledge and opinions, raise awareness, challenge realities and practice their right to free speech. 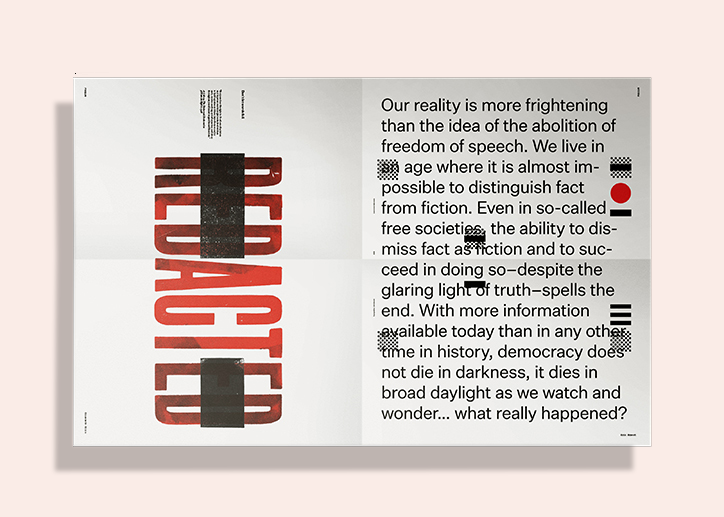 How/where are the newspapers being distributed?

The newspaper was mainly distributed at the exhibition event at the Royal College of Art, showcasing all of the contributors‘ works. We were also fortunate enough that Jeremy Leslie of MagCulture offered to distribute some copies through the shop.

Since the feedback was very positive we decided to publish the content on our website and Instagram as well. There you can see all the contributions with the accompanying rationales. 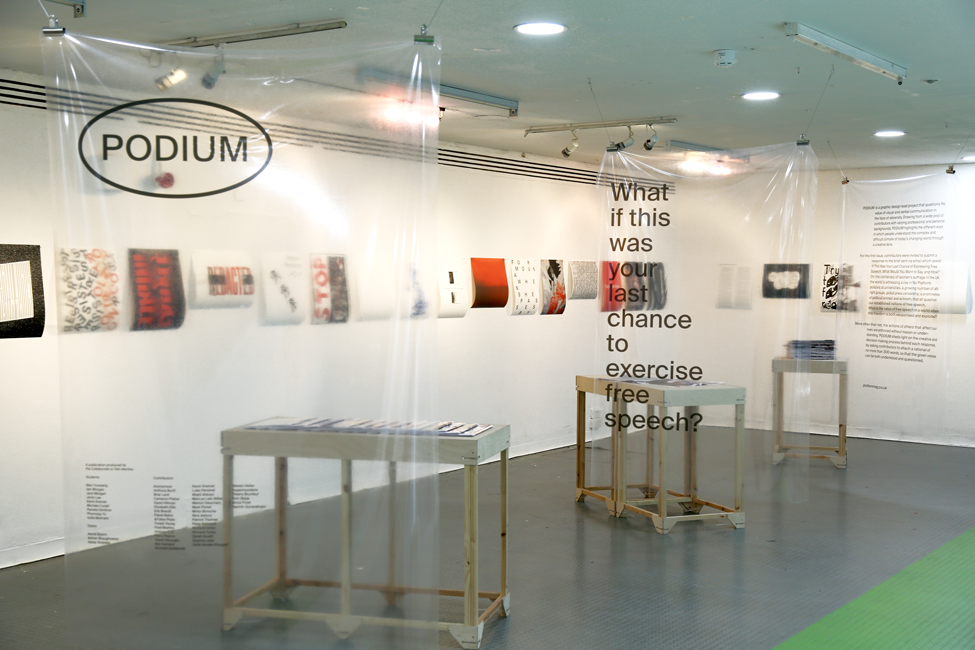 PODIUM exhibition at the Royal College of Art. 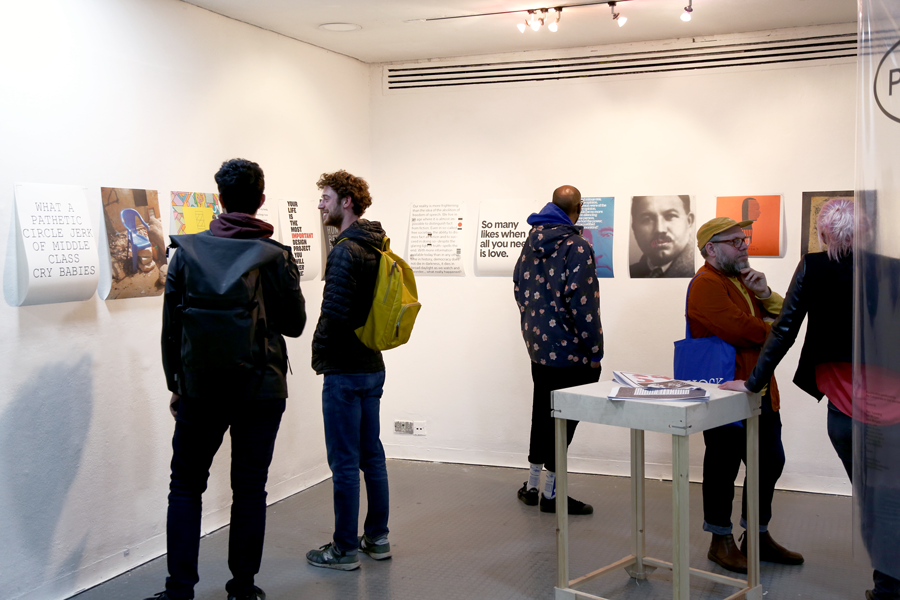 PODIUM exhibition at the Royal College of Art.

What sort of response have you had to the project?

We have received a lot of positive feedback. Many people loved seeing original work from their favorite designers but also appreciated the critical thinking behind every contribution.

PODIUM has also received coverage in Eye Magazine and It‘s Nice That.

Others have critiqued us: saying we, as designers, are not in the right position or well-informed enough, to tackle something as fundamental as free speech. Both reactions were exactly what we hoped for. It showed us that we had created something that resonates with people, and that creates new conversations around something we often take for granted. 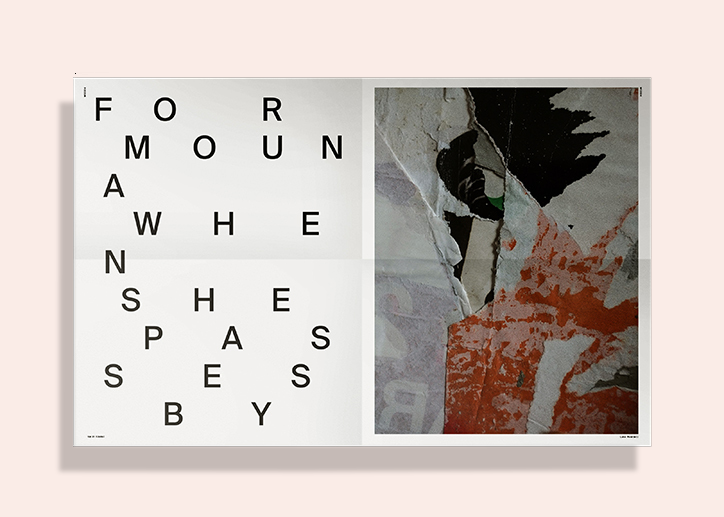 What's next for PODIUM?

Due to the highly positive feedback we got on and offline, we are planning to publish a second issue of PODIUM. The approach—collaboration—will stay the same, but the topic will differ. We are hoping to encourage even more contributors to take part in our project and to collect an even wider array of responses on important topics.